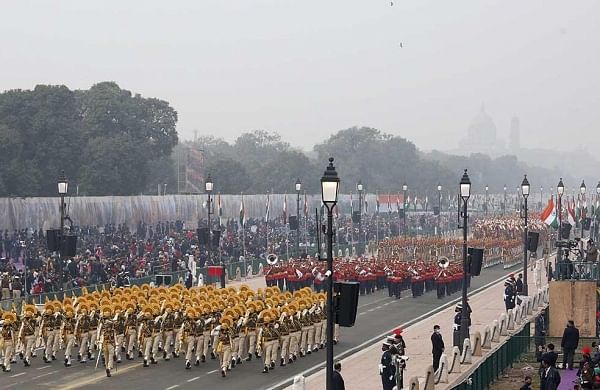 NEW DELHI: Keeping in mind the fast infections of the new variant of the COVID 19, the strength of the marching contingents on the Republic Day have been reduced this year.

Briefing the media persons in virtual formation, Chief of Staff of the Delhi Area and deputy parade commander Lt Gen Alok Kakkar said, “The troops will be marching in 12 rows and 8 columns.” Earlier the contingents used to have a strength of 144 personnel.

Also, this time a total of 6 marching contingents from the Indian Army will be participating on the occasion of 73rd Republic Day parade celebrations on January 26. The contingents will be wearing uniforms depicting the change in it since independence and also will carry the weapons of those times.

The first contingent to march forward will be of Rajput Regiment, wearing the uniform of 1950 and carrying .303 rifle, followed by Assam Regiment, donning the dress of 1960s. Then, the Jammu & Kashmir Light Infantry troops will be attired in the 1970s uniform with 7.62 mm self-loaded rifle.

The personnel of the Sikh Light Infantry and Army Ordnance Corps would be wearing the current uniform and would be carrying a 5.56mm rifle.

The newly-inducted combat uniform will be donned by the Parachute Regiment contingent. The troops will be carrying Israel-origin Tavor rifles.

Major Vishesh, Parachute Regiment’s contingent commander said, “Wearing the new combat uniform at the Republic Day parade will be a proud moment for the elite force,”.

Major Varun Pratap Singh will lead the Rajput Regiment contingent. “It’s an honour for us to participate in the Republic Day parade.” He spoke.

This time the parade will display a unique mix of vintage and new equipment in the mechanised column.

Maj Gen Kakkar added that two new events have been added in the Beating the retreat ceremony this year.

There would be laser mapping protection on the north and south blocks of the Raisina Hills and a coordinated show of 1000 drones. They will display various shapes when it is dark at Vijay Chowk. It will be held for the first time in India.