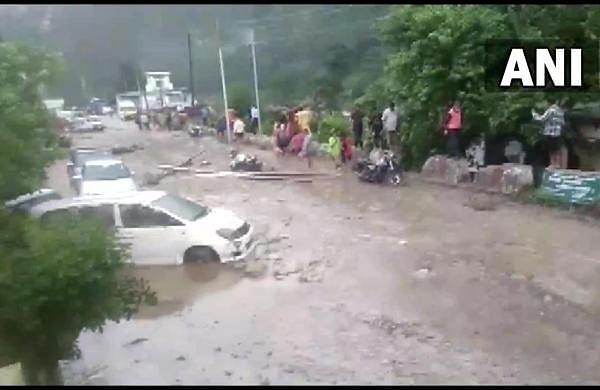 CHAMPAWAT: In Rain-battered Uttarakhand, an under-construction bridge over the Chalthi River in Champawat got washed away due to a rise in water level.

National forecasting agency, India Meteorological Department (IMD) has issued a red alert for Uttarakhand with a forecast of heavy to very heavy rainfall in the state and heavy rainfall has been predicted for the next few days.

Prime Minister Narendra Modi on Tuesday spoke to Uttarakhand Chief Minister Pushkar Singh Dhami to take stock of the situation arising due to heavy rains in the state. Dhami on Monday took a detailed review of the situation.

#WATCH | An under construction bridge, over a raging Chalthi River in Champawat, washed away due to rise in the water level caused by incessant rainfall in parts of Uttarakhand. pic.twitter.com/AaLBdClIwe

The Badrinath National Highway in Chamoli district has been completely blocked due to debris at seven places following incessant rains over the last 48 hours, the district administration said on Tuesday.

As a precautionary measure, the Badrinath Char Dham Yatra has been halted, and passengers en route to Badrinath Temple were stopped in safe places.

Incessant rains have been lashing parts of Uttarakhand since October 16, forcing the state to temporarily suspend the Char Dham Yatra on Monday. Higher reaches of the hill state, including Darma, Vyas and Johar Valley, have received snowfall of more than six inches in the last 48 hours