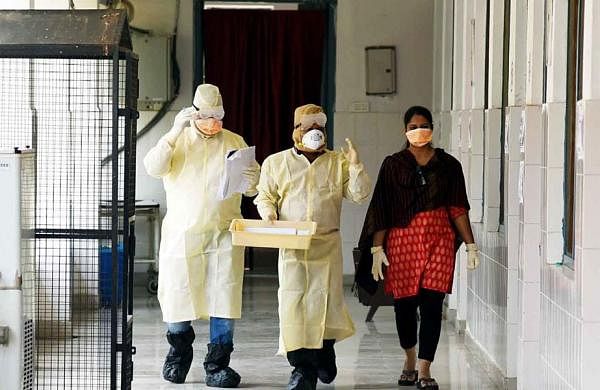 PATNA: RJD workers in Bihar's Vaishali district on Thursday took a unique "matka march' (procession with earthen pots on heads) to protest the rape of a minor girl allegedly by a private security guard at a COVID-19 isolation ward of the Patna Medical College and Hospital (PMCH) on July 9.

The RJD workers, led by RJD leader Kedar Prasad Yadav, marched along the roads of Bhagavanpur in Vaishali district and NH-22 raising slogans against the Nitish-Kumar government.

They demanded the dismissal of health minister Mangal Pandey for his utter failure in ramping up health facilities and in providing security to the patients at hospitals like PMCH, the state's largest government-run hospital.

On July 8, a 15-year-old minor girl was admitted to the COVID-19 isolation ward of the PMCH by a team of Childline activists after she was found loitering around at the Patna junction.

On the night of July 9, Mahesh Kumar, a private security guard of the ward, allegedly raped her.

The matter was reported to the police by the Childline team on July 9 but the accused was arrested only on July 15.

The incident has drawn widespread condemnation from people and politicians. The RJD workers took out the "matka march", traditionally considered to be the strongest expression of resentment by the people of Bihar.

The protestors asked the government to feel ashamed, take moral responsibility and to sack Health Minister Mangal Pandey for the rape at the COVID-19 isolation ward.