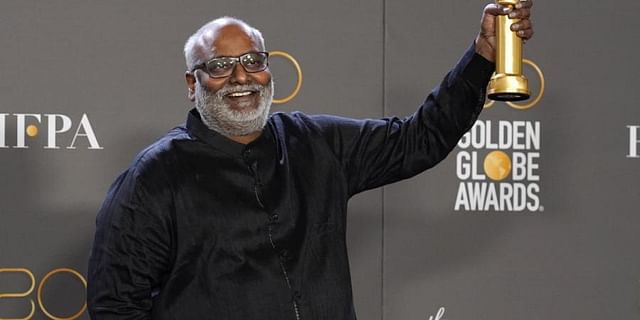 NEW DELHI: With the Golden Globe win of "RRR" track 'Naatu Naatu', Indian composer MM Keeravaani has become the toast of the 2023 Hollywood awards season, but his connect with audiences goes way back to the 1990s generation still mesmerised when they hear the romantic Telugu track 'Thelusa Manasa'.

Better known to audiences up north as 'Tum Mile' in Hindi from Mahesh Bhatt's 1994 film "Criminal", 'Thelusa Manasa', a breezy love ballad sung by SP Balasubrahmanyam and KS Chithra, is everything that 'Naatu Naatu' is not.

'Naatu Naatu', which translates to bucolic in Telugu, was a runaway hit at home in India with the release of SS Rajamouli's magnum opus.

Soon, the viewers in the West were also swept away in the irreverent and yet inclusive vibe of the 4.35-minute song enacted on screen by leading stars Ram Charan and Jr NTR.

"Overwhelmed by the response from all over for the Golden Globe. Thank You for all your wishes," Keeravaani wrote on Twitter after the win.

The rousing soundtrack and background score of "RRR", a fictional tale set in pre-Independent India following the adventures of real-life revolutionaries Alluri Sitarama Raju (Ram Charan) and Komaram Bheem (Jr NTR) is the bedrock of the film's success around the globe.

Who can forget the viral visuals of foreigners trying to match steps to the rhythm of the song as they erupted in a euphoric dance during the screening of the period action epic in several theatres? Apart from Telugu, the film released in four more languages, and so did the song.

It is 'Naattu Koothu' in Tamil, 'Naacho Naacho' in Hindi, 'Karinthol' in Malayalam, and 'Haali Naatu' in Kannada.

Keeravaani, who works across film industries in India, made his debut in 1990 with the Telugu film "Manasu Mamatha".

Interestingly, he is credited for his work in different names.

While he is M M Keeravaani in the Telugu and Malayalam industries, the celebrated music director is called Marakathamani in Tamil and M M Kreem in Hindi.

While "Kshana Kshanam" is a wide-ranging album packaged in traditional song-and-dance style, he received critical acclaim and a Tamil Nadu State Film Award for best music director for "Azhagan".

As MM Kreem, Keeravaani left an indelible mark on the psyche of the Hindi film music aficionado.

For the 2002 Hindi film "Sur - The Melody of Life", he balanced a pining 'Aa Bhi Ja' with intoxicating playfulness of new love with 'Dil Mein Jaagi'.

He reunited with Bhatt for the 1998 critical hit "Zakhm", for which he created jewels such as the rhythmic 'Gali Mein Aaj Chaand Nikla', hoping that the wait would end and the beloved would finally show up at the doorstep.

He even tried his hand at "Paheli", Amol Palekar's film set in a Rajasthan village, with songs such as 'Dheere Jalna', 'Kangna Re', and 'Minnat Kare'.

Music and cinema all run in the family.

Born in a Telugu family in Kovvur in Andhra Pradesh, the 61-year-old composer is the son of Koduri Siva Shakthi Datta, a lyricist and screenwriter, best known for the song 'Mamathala Thalli' from "Baahubali: The Beginning", another Rajamouli hit film.

In his Golden Globe acceptance speech, the music composer thanked Rajamouli for his "vision".

"It has been an age-old practice to say that this award actually belongs to someone else. So I was planning to not say those words when I get an award like this, but I'm sorry to say that I'm going to repeat the tradition because I mean my words. This award belongs to, in order of priority, my brother and the director of the movie, SS Rajamouli for his vision. I thank him for this constant trust in my work and support," Keeravaani said from the dais.

Call it familial bond or trust in his ability, Rajamouli has bet big on his elder cousin right from his directorial debut "Student No 1", the 2001 Telugu film.

The pathbreaking success of the movie, which starred Jr NTR, Gajala, and Rajeev Kanakala, started a collaboration that has continued with diverse genre Telugu titles such as Jr NTR's actioner "Simhadri" and sports action movie "Sye", fantasy epic "Magadheera" with Ram Charan, and the 2005 actioner "Chatrapati" and the epic fantasy film series "Baahubali", both fronted by Prabhas. (AIR NEWS)