Ruturaj, Devdutt will be disappointed but management will give them a free hand: Mhambrey 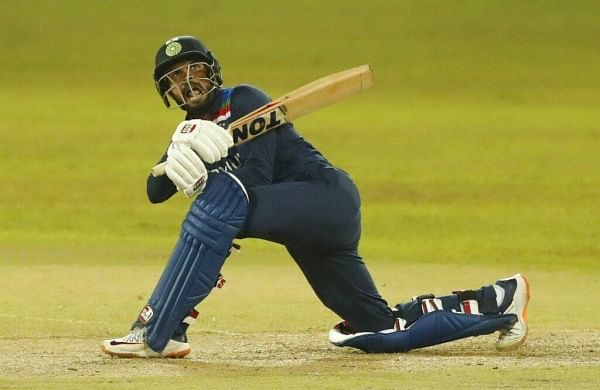 CO,LOMBO: India bowling coach Paras Mhambrey has backed Ruturaj Gaikwad and Devdutt Padikkal to come good in the next match, saying there is no pressure on them and the team management will give the batting duo a free hand.

Gaikwad and Padikkal weren't able to convert their starts on their India debut during the second T20I against Sri Lanka here on Wednesday.

While Ruturaj perished after making an 18-ball 21, Padikkal, who walked in at number three, departed after making a quick-fire 29 off 23 balls as India lost the match by four wickets.

Asked what the team management would tell the duo, Mhambrey said, "When you are going to make your debut for your country, it is always going to be nerves and we know that. The discussion is always to give them a free hand, there is no pressure on them."

"Obviously the situation was such . We knew that in terms of batting, we had only five or six batsmen, that we could plan and go ahead with this game, so we focussed on those."

"There were no such instructions on how to play, yes they will be disappointed, but every opportunity they get to represent the country, they will learn," he said at a virtual press conference.

For the record, two national selectors Debashish Mohanty and Abey Kuruvilla are in the island nation with the team.

Put into bat, India were restricted to a modest 132 for 5 with skipper Shikhar Dhawan top-scoring with 40.

The hosts then chased down the target with four wickets in hand and two balls to spare with Dhananjaya de Silva hitting match-winning unbeaten 40.

With Krunal Pandya testing positive for COVID-19 and subsequently eight of his close contacts put in isolation, there was a lot of uncertainty over whether the second game would go ahead or not.

"Rahul (Dravid) was constantly in touch with the BCCI officials.

We were told that, see whatever decision will be taken, we will be informed, so we were ahead anyway with our preparation," Mhambrey said.

Kuldeep Yadav seems to have found his mojo back during the ongoing tour and Mhambrey described the chinaman as "extremely talented bowler" and also credited him for executing the plans.

"He (Kuldeep) is a very thinking bowler," Mhambrey said of the spinner, who claimed four wickets in three limited over games that he played during the tour.

"They are a lot of discussions we had during the period that we spend before the games together, seen the videos, discussing on the plans, and it all boils down to execution. And so, the credit should be given to him."

Mhambrey said Kuldeep will have to keep working hard to retain his place in the squad.

"He is in and out of the team for a while now, which he knows, he also knows that he needs to work hard to maintain his position which he is doing, so happy to see that," he said.

"And I'm very happy with the results that he is getting. I am sure he will take a lot of positives from this since the T20 World Cup is also around the corner, and it really increases his chances to be part of the squad."

The former India pacer, who has seen the journey of many young players from this team as the bowling coach of the India A squad, also expressed happiness over their progress.

"Pretty happy with their performance and I have seen them in the past in the last few years when I was associated with them, they have been part of the India A set up for a while and very pleased with the way they have progressed.

"They definitely had a lot of potential and that is the reason, they are representing the country."