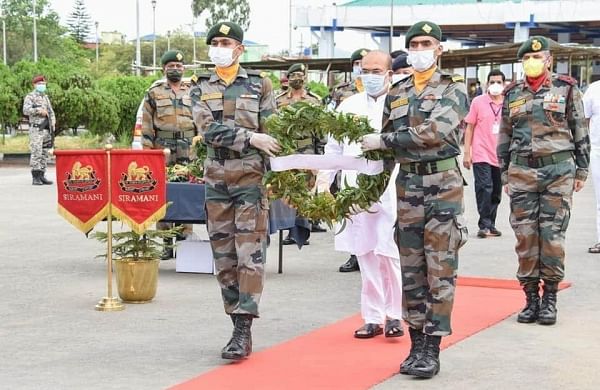 GUWAHATI: A day after the militants gunned down three Assam Rifles personnel and injured six others in an ambush in Chandel district of Manipur, Chief Minister N Biren Singh on Friday said the sacrifices made by the soldiers would not go in vain.

“With deep sorrow, I paid homage to the three brave soldiers, who have sacrificed their lives in a cowardly attack by the militants...The country will always remember their martyrdom and their sacrifice will not go in vain,” Singh tweeted.

Earlier in the day, he paid tributes to them at a wreath-laying ceremony held at the Bir Tikendrajit International Airport in Imphal.

The slain jawans were Pranay Kalita from Assam, Ratan Salam from Manipur, and Methna Konyak from Nagaland. The injured were admitted to a military hospital in Imphal.

The attack was perpetrated on Wednesday evening at the Khongtal area of Chandel district bordering Myanmar when some 15 personnel were returning to their base after a road patrol duty. The militants triggered an IED blast and rained bullets on the soldiers.

Describing it as a cowardly attack, Singh said the state government would take up necessary arrangements to rehabilitate and provide a quality life to the families of martyrs from Manipur who have served in the military and paramilitary forces.

Militant groups Manipur Naga People’s Front, Revolutionary People’s Front, and the Paresh Baruah faction of United Liberation Front of Asom had jointly claimed responsibility for the attack. Several rebel groups from the Northeast with bases in the jungles of Myanmar have carried out such coordinated attacks from time to time.

Back in 2015, suspected militants of the SS Khaplang faction of the National Socialist Council of Nagaland (NSCN-K) had shot dead 18 Army soldiers in a deadly ambush in Chandel district. Over a dozen other personnel were also injured. Later, the Indian Army soldiers had allegedly carried out a cross-border operation inside Myanmar in which 15-20 militants were reportedly killed.