SC notice to TN assembly speaker, others on DMK's plea for disqualification of 11 AIADMK MLAs 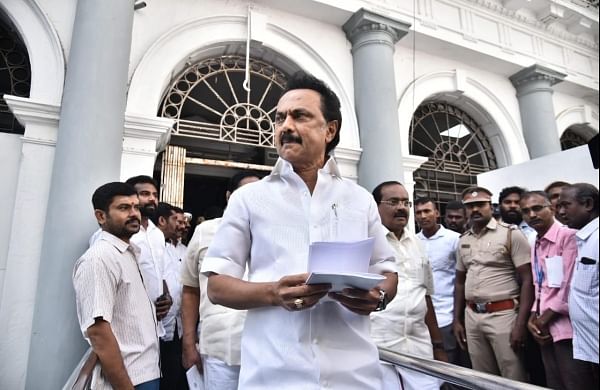 NEW DELHI: The Supreme Court on Wednesday sought responses from the Tamil Nadu assembly speaker P Dhanapal and others, including assembly secretary, on a plea of DMK seeking a direction to the speaker to "forthwith" decide its pending plea for disqualification of 11 AIADMK lawmakers who had voted against Chief Minister K Palaniswami during the 2017 confidence vote.

A bench comprising Chief Justice S A Bobde and justices R Subhash Reddy and A S took note of the submission of the main opposition party of the state that speaker has not been taking any decision on the MLAs for last three years and issued notices to him, assembly secretary and 11 lawmakers including O Paneerselvam.

Senior advocate Kapil Sibal and lawyer Amit Anand Tiwari appeared for the DMK and said that the assembly term will be getting over soon and hence, the matter be fixed for an early hearing.

Senior advocate Mukul Rohatgi, who appeared on behalf of an AIADMK MLA, opposed the issuance of the notice. The apex court has now fixed the DMK's plea for hearing after four weeks.

DMK, in its fresh plea filed through advocate Amit Anand Tiwari, has sought a direction to the Assembly speaker to decide its plea, pending since March 20, 2017, seeking disqualification of the 11 lawmakers including Deputy Chief Minister O Panneerselvam under anti-defection law for voting against the Palaniswami government.

The DMK, in its plea, has referred to an earlier order of the top court which had disposed of the plea after taking note of the submission that the Speaker has initiated proceedings on the disqualification plea.

The plea has sought a direction to hold the 'deliberate action' of the Speaker in not deciding the 'disqualification petition' as 'arbitrary and violative' fundamental rights and constitutional schemes.

"Issue a writ. directing Respondent No. 2 (Speaker) to declare that Respondent Nos. 3-13 (11 AIADMK MLAs) are disqualified or in the alternative, direct the Speaker to decide the disqualification petition forthwith," said the plea filed through R Sakkrapani, whip of DMK in Assembly.

DMK referred to an apex court order in another case in which it had ordered forthwith removal of BJP lawmaker and Manipur Forest Cabinet Minister TH Shyamkumar, restraining him from entering the Assembly till further orders.

The apex court had invoked its plenary power under Article 142 of the Constitution to remove a cabinet minister from any government as the Assembly speaker could not decide the disqualification plea despite its specific directions.

"For the last three years and 3 months, speaker (R-2) has not decided the issue.

This inaction of the Respondent no 2 assumes greater significance in view of the fact that in the earlier round of litigation, before this Court vide an order dated February 14, speaker was asked to decide the disqualification petitions in accordance with law.

"Despite that nothing has been done for last 4 months, whereas the law requires the Speaker to decide a petition from disqualification within an outer limit of three months," the plea said.

The speaker has 'continued to sit over the issue' and the undertaking given by the Advocate General on his behalf was not followed in letter and spirit, it said.

The plea has sought disqualification of Panneerselvam and 10 others for having voted against the Palaniswami government when they were in the rebel camp.

It had contended that by voting against the trust motion, these MLAs violated the whip issued by the ruling party and hence attracted disqualification under the anti-defection law.