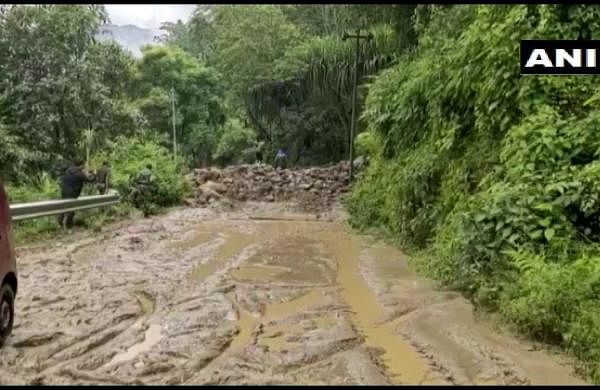 GANGTOK: Search was underway on Saturday for the five labourers who went missing after their camp at Mamkhola in West Bengal's Kalimpong district got washed away by a rivulet which had swollen due to heavy rainfall, officials said.

Two persons were rescued and admitted to the nearby district hospital at Singtam in Sikkim, they said.

One body was also retrieved from the area by the rescuers, they added.

The deceased was identified as Dhan Singh Bhandari (35) of Nepal.

Eight labourers, engaged in the construction of the Sevoke-Rangpo rail project, went missing as the rivulet washed away their camp on Friday morning amid heavy rainfall, officials said.

Kalimpong Police is leading the search and rescue operation along with a rafting team.

A disaster management team also arrived at the spot on Saturday morning from Dabgram in West Bengal, while a sniffer dog was sent from Siliguri.

Incessant rainfall in the area was posing hindrances to the rescue operations, officials said.

Traffic has been diverted from this area as it is on the National Highway-10, the lifeline of Sikkim, they said.

Multiple landslides on NH-10 on the West Bengal side between Rangpo and Melli blocked movement of traffic, cutting off the Sikkim border, they said.

A culvert near Mamkhola was also damaged, blocking the all-important highway.

The landslide at 29th Mile, around 60 km from the Sikkim border, was cleared and open for one-way traffic on Friday evening.

Commuters have been advised to avoid this stretch till further notice.

The alternate road from Mamring in East Sikkim to Melli in South Sikkim is being used till landslides are cleared, officials said.

Meanwhile, MLA Anjeeta Rajalim along with District Collector M Bharani Kumar visited Kerabari, Chalisey and Melli Bazaar in the South Sikkim district to take stock of the damage caused amid the heavy rainfall.

Melli Bazaar is completely cut off from other parts of Sikkim and West Bengal as all the approach roads have been washed away, officials said.

The Revenue Surveyor concerned has been directed to make door-to-door visits to the houses damaged, Kumar said.

Melli Bazaar has been hit by multiple landslides and all the affected families evacuated and relocated to a government building at a safer location, officials said.

Around 10 houses were damaged in Melli Bazaar along with a secondary school, a State Bank of Sikkim branch and a road that connects NH-10 with Melli Bazaar on the Sikkim side, they said.