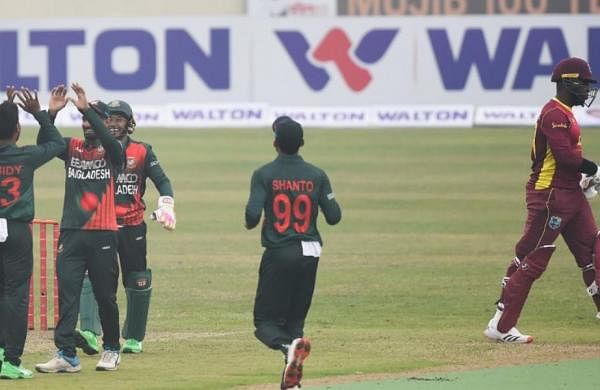 DHAKA: Shakib Al Hasan claimed 4-8 on his return to international cricket as Bangladesh bowled out West Indies for a paltry 122 in 32.2 overs in the opening game of the three-match one-day series on Wednesday.

All-rounder Shakib is back after being given a two-year ban by the International Cricket Council in October 2019, with one year suspended, for failing to report approaches from a bookmaker. Debutant Hasan Mahmud and fellow fast bowler Mustafizur Rahman also played key roles in Dhaka, taking 3-28 and 2-20 respectively.

Rain held the players up for about an hour after Bangladesh captain Tamim Iqbal had won the toss and asked West Indies, featuring six ODI debutants, to bat. Shakib, in his first game for Bangladesh since the 2019 World Cup, bowled seven overs in a row and ripped through the middle order as West Indies lost three wickets for 11 runs.

Debutant Kyle Mayers and Rovman Powell, who hit two sixes, provided some resistance with a partnership of 59 for the sixth wicket. Mahmud picked up his first wicket by having Powell caught behind for 28 and followed up by trapping Raymon Reifer lbw for naught with his next ball.

Mayers top-scored with 40 before being undone by a Mehidi Hasan delivery that spun sharply. It is Bangladesh's first match after a nine-month layoff due to the COVID-19 pandemic. The series is part of the ICC World Cup Super League which will determine which teams qualify for the 2023 World Cup in India.

The teams play the remaining ODIs on Friday and Monday, followed by two test matches in February.