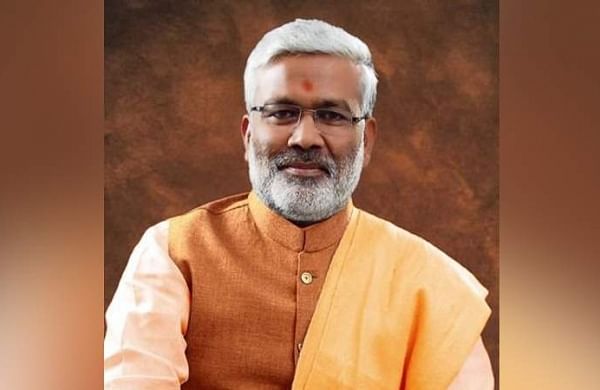 BALLIA/LUCKNOW:  BJP's state unit president Swatantra Dev Singh, who showered petals on a party MLA who was issued notice for supporting the main accused in the Durjanpur village firing incident, Monday said he had acknowledged party workers in general and not any individual through his gesture.

I was not showering flowers on an individual but on party workers during a programme in Ballia on Saturday, he clarified two days after being caught on camera while showering petals on the party's Bairia MLA Surendra Singh.

He said Surendra Singh has been served notice and has been asked to give his reply after which an impartial enquiry would be conducted.

Swatantra Dev Singh also said the enquiry into the Durjanpur incident is being done by police in an impartial manner and there is no pressure from the government or the party.

On Saturday, Swatantra Dev Singh was caught on camera while showering flowers on Surendra Singh merely days after serving him a notice for his statements supporting the main accused in the firing incident at Durjanpur village.

The video which went viral was recorded when Swatantra Dev Singh had participated in a 'bhumi pujan' programme of a Krishna temple at Kathauda village in Sikanderpur area.

In the footage, both the leaders are seen sitting next to each other.

The state BJP chief is seen showering petals on Surendra Singh, who acknowledges the gesture with folded hands.

Earlier last week, the state unit of the party had issued a show cause notice to Surendra Singh for issuing statements in support of Dhirendra Pratap Singh, a local party leader who allegedly shot dead a 46-year-old man in Ballia's Durjanpur village following a quarrel over the allotment of ration shops on October 15.

The legislator was given a week's time to respond to the notice.

The Bairia MLA had defended the accused, saying the latter opened fire in self-defence as it was a do-or-die situation for him.

He had also accused the administration of bias and demanded that action be taken against the other side.

Meanwhile, reacting to the video, the family of the deceased Jay Prakash Pal said it appears the BJP leadership is merely doing lip service in the name of action against Surendra Singh who openly defended the main accused.

My brother was killed in front of senior officials and the Bairia MLA has been openly defending him.

Our family hoped that BJP leadership would take action against Surendra Singh but now it seems they are only pretending to act against him," the victim's brother Suraj Pal said.

Swatantra Dev Singh, however, said the MLA has been served notice and whosoever is found guilty would be punished.

The Bairia MLA, reacting to Saturday's incident, said he had gone to attend the programme of the state unit president out of courtesy and to welcome him.

(THE NEW INDIAN EXPRESS)
357 Days ago