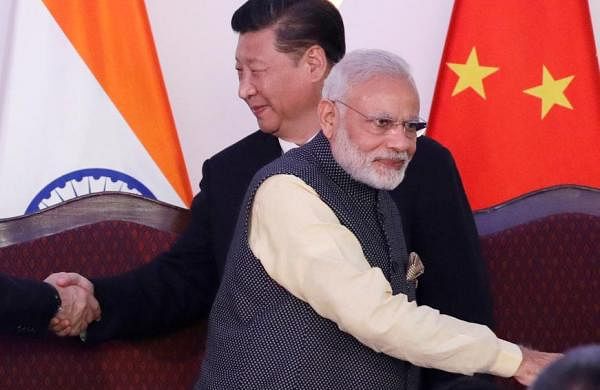 By K J M Varma (Eds: Updating with more details) Beijing, May 29 (PTI) China on Friday rejected US President Donald Trump's offer to mediate between India and China to end their current border standoff, saying the two countries does not need the intervention of a "third party" to settle their differences.

In a surprise move, Trump on Wednesday offered to "mediate or arbitrate" the raging border dispute between India and China, saying he was "ready, willing and able" to ease the tensions, amid the continuing standoff between the armies of the two Asian giants.

Reacting for the first time to the US president's offer, Chinese Foreign Ministry spokesman Zhao Lijian said, the two countries did not want the "intervention" from a third party to resolve the current military standoff.

'Between China and India we have existing border-related mechanisms and communication channels', Zhao told a media briefing here when asked about Trump's offer.

'We are capable of properly resolving the issues between us through dialogue and consultation. We do not need the intervention of the third party', he said.

"We have informed both India and China that the United States is ready, willing and able to mediate or arbitrate their now raging border dispute. Thank you!" Trump tweeted on Wednesday.

He reiterated his offer on Thursday while speaking to reporters at the White House.

Responding to a question on his tweet, Trump renewed his offer, saying if called for help, "I would do that (mediate). If they thought it would help" about "mediate or arbitrate, I would do that," he said.

India on Wednesday said it was engaged with China to peacefully resolve the border row, in a carefully crafted reaction to Trump's offer to arbitrate between the two Asian giants to settle their decades-old dispute.

"We are engaged with the Chinese side to peacefully resolve it," External Affairs Ministry Spokesperson Anurag Srivastava said, replying to questions at an online media briefing.

President Trump has previously offered to mediate between India and Pakistan on the Kashmir issue, a proposal that was rejected by New Delhi.

At the Chinese Foreign Ministry briefing, the spokesman said 'China's position on the China-India boundary question is consistent and clear'.

'We have been implementing the important consensus reached by leaders of both the countries, observing the bilateral agreements and have been committed to safeguarding territorial sovereignty and security, stability and peace in the border area', Zhao said.

He reiterated his earlier comment that 'Now the overall situation in the China-India border area is stable and controllable', he said, once again indicating a conciliatory tone amidst the tense situation along the border.

Several areas along the Line of Actual Control in Ladakh and North Sikkim have witnessed major military build-up by both the Indian and Chinese armies recently, in a clear signal of escalating tension and hardening of respective positions by the two sides even two weeks after they were engaged in two separate face-offs.

India has said the Chinese military was hindering normal patrolling by its troops along the LAC in Ladakh and Sikkim and strongly refuted Beijing's contention that the escalating tension between the two armies was triggered by trespassing of Indian forces across the Chinese side.

The Ministry of External Affairs said all Indian activities were carried out on its side of the border, asserting that India has always taken a very responsible approach towards border management.

At the same time, it said, India was deeply committed to protect its sovereignty and security.

MEA Spokesperson Anurag Srivastava on Thursday said India is committed to the objective of maintenance of peace and tranquillity along the Line of Actual Control and that Indian troops take a very responsible approach towards border management.

"The two sides have established mechanisms both at military and diplomatic levels to resolve situations which may arise in border areas peacefully through dialogue and continue to remain engaged through these channels," he said at an online media briefing.

China claims Arunachal Pradesh as part of southern Tibet while India contests it.