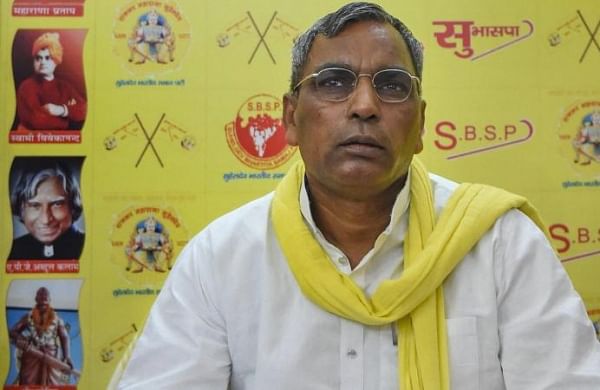 BALLIA: SBSP chief Om Prakash Rajbhar on Sunday said the Samajwadi Party will conduct a caste census and give representation to all sections of the society as per their numbers, if voted to power in the 2022 Uttar Pradesh assembly elections.

Rajbhar, whose party entered into an alliance with the Samajwadi Party (SP) for the polls, told reporters in Rasra that Akhilesh Yadav will be the chief minister if the alliance comes to power.

Asked to comment on his idea of five chief ministers and 20 deputy chief ministers on a rotational basis, he clarified that his statement was applicable in case the Bhagidari Sankalp Morcha had formed the government.

"Our aim is to remove the BJP, and make Akhilesh Yadav the chief minister," Rajbhar said.

Maurya had on Wednesday stirred a controversy by apparently supporting the construction of the Krishna temple in Mathura, where a temple and a mosque are located close to each other.

"The construction of grand temples is on in Ayodhya and Kashi, and preparations are on for one in Mathura (Ayodhya Kashi bhavya mandir nirmaan jaari hai, Mathura ki tayaari hai)," he had tweeted.

Mathura is considered to be the birthplace of Lord Krishna and some Hindu outfits have claimed that the "actual birthplace" is located inside an Aurangzeb-era mosque built next to a prominent temple in the holy city.

"If Owaisi demands 100 seats, how can there be an alliance with him?" he asked.

The AIMIM had announced that it would contest on 100 seats in the upcoming state polls by tying up with SBSP and its Bhagidari Sankalp Morcha.

The morcha is a front of like-minded political parties led by Rajbhar, a former BJP ally.