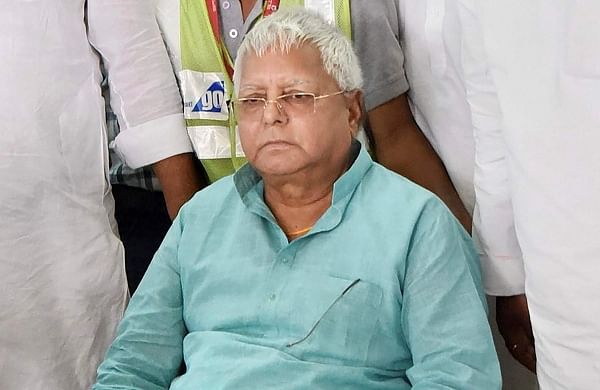 PATNA: A special court here has issued a production warrant against RJD chief Lalu Prasad, who is lodged in a jail in Ranchi, in connection with a defamation case.

Special MP/MLA court judge Kumar Abhinav on Monday issued the production warrant against Prasad in the case filed by Uday Kant Mishra, a member of Bihar State Disaster Management Authority, for making objectionable comments against him.

The court asked the authorities of Birsa Munda jail in Ranchi to produce Prasad before it on December 2, 2019, which is the next date of hearing in the case, Mishra's counsel V S Dubey told PTI.

The Rashtriya Janata Dal (RJD) supremo is in the high-security jail following his conviction in several fodder scam cases. The court on Monday issued fresh production warrant against Prasad as he could not be produced before it via video conferencing, Dubey said.

The authorities of Birsa Munda jail had earlier told the court that Prasad could be produced before it through video conferencing as his health condition was not good. Prasad and his son Tejashwi had mentioned Mishra's name in reference to the Srijan scam publicly during a rally at Bhagalpur in 2017.

The multi-crore Srijan scam is related to fraudulent transfer of government money into the account of a Bhagalpur-based NGO and the CBI is investigating it. Srijan is a registered society for women in small income-generating activities.

They had also alleged that Bihar Chief Minister Nitish Kumar regularly visited Mishra's house whenever he came to Bhagalpur even though he had the facility to stay at the circuit house, Dubey said in his complaint.

Terming the utterances of the father-son duo as defamatory, Mishra had first sent legal notices against them demanding an unconditional apology for their objectionable comments, Dubey said.

Later, Mishra proceeded against Prasad and decided not to move ahead against Tejashwi in the case.