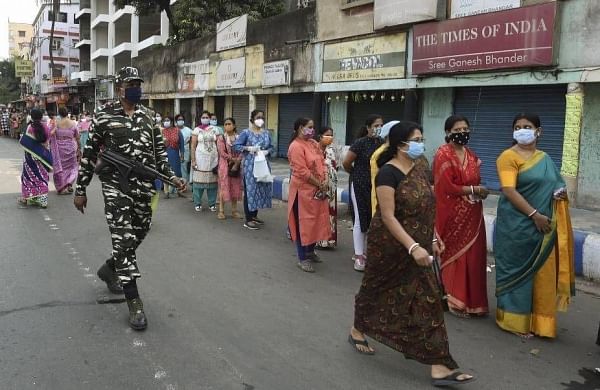 SALT LAKE/BURDWAN/SILIGURI: Sporadic incidents of violence were reported from some areas where polling was underway in the fifth phase of the assembly elections in West Bengal on Saturday, officials said.

Polling was being held in 45 seats in North 24 Parganas, Purba Bardhaman and Nadia in south Bengal, and Jalpaiguri, Darjeeling and Kalimpong districts in the north.

The security personnel are maintaining a tight vigil and they have addressed a few incidents that were reported, an official at the office of the Chief Electoral Officer (CEO) said.

In the Shantinagar area of Bidhanagar, a clash broke out between TMC and BJP supporters with both sides accusing each other of stopping the voters from going to the polling booths.

A huge contingent of the central force was rushed to the spot to control the situation, they said.

In Siliguri, a scuffle broke out between TMC and CPI (M) supporters outside a polling booth.

In Santipur in the Nadia district, the TMC alleged that personnel of the central forces were asking voters to go back, a charge rubbished by the authorities.

Further, the TMC alleged that a polling booth in the Bardhaman Uttar constituency was captured by the BJP.

The allegation was denied by the opposition party, while poll officials said that no such incident has happened.

In Bijpur in North 24 Parganas, TMC and BJP supporters clashed after the opposition party alleged that voters were being prevented from going to the booths.

The BJP also alleged that some of its booth agents in the Minakha constituency of the same district were "kidnapped" by the TMC.

The TMC said that the BJP does not have enough strength to depute agents in all the booths and that is why it was levelling such "baseless" allegation.

At many places, voters were seen without masks amid the resurgent coronavirus, raising concerns.

The security forces ensured social distancing at the booths, while election officials provided masks, hand sanitisers and polythene gloves to the voters.

The polling started at 7 am and will continue till 6.30 pm in 15,789 stations across the six districts.

The Election Commission has deployed 853 companies of central forces in this phase.