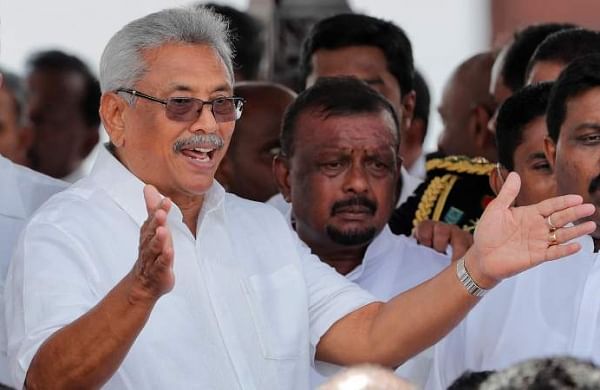 COLOMBO: Sri Lanka's newly elected President Gotabaya Rajapaksa would work within the "American perimeter" but would maintain close ties with India while doing business with cash-rich China more cautiously, according to experts.

Rajapaksa stormed to victory on Sunday, trouncing his nearest rival Sajith Premadasa by a margin of over 13 lakh votes - 52.25 percent of votes polled against 41.99 percent.

The 70-year-old controversial wartime defense secretary's victory is of significant importance for India which will hope that the new dispensation in Colombo will not allow any foreign power inimical to New Delhi's interest in the strategically located island nation.

The experts, who have been closely monitoring Sri Lanka's diplomatic ties with major global powers for decades, believe that Gotabaya would adopt a policy of not weaning too much away from the US interests in the region.

"Gotabaya would be working 'within the American perimeter' which means that he would adopt a policy of not weaning too much away from the US interests in the region, the end result of this would be that he would not be seen too pro-China or too anti-India," Jehan Perera, executive director of National Peace Council, an independent think tank, said.

However, he stated that the Sri Lankan President would also want to maintain a friendly relation with Prime Minister Narendra Modi.

"Personally I think he would want to maintain friendly relations with Narendra Modi and even try to copy Modi model in Sri Lanka' - which is remaining pro-nationalist to maintain his voter base while dealing with other issues," he said.

Within hours of Gotabaya's victory on Sunday, Prime Minister Modi telephoned him. The Prime Minister sent a congratulatory message and said he looks forward to further deepen relations between the two nations.

"Congratulations @GotabayaR on your victory in the Presidential elections. I look forward to working closely with you for deepening the close and fraternal ties between our two countries and citizens, and for peace, prosperity as well as security in our region," Modi tweeted.

In his response to Modi's warm wishes, Gotabaya thanked the Prime Minister and said the two countries were bound by history and common beliefs.

It is only inevitable that Gotabaya would honor Modi's invitation to make his first official tour overseas, most commentators believe.

Perera said the seemingly pro-Gotabaya attitude shown by the US when the new president was facing issues locally with his alleged dual citizenship had inferred that the US was favoring him over the others.

Gotabaya was a dual citizen of the US and Sri Lanka until April this year. His detractors argued that he had not renounced his US citizenship and therefore was not qualified to run for the executive President's post.

The experts also believe that Sri Lanka under Gotabaya would engage China, the country's top lender, and do business with the Communist giant.

"He would engage China and do business with them and China too would be wary that their previous engagement with the Rajapaksas had created bad publicity for them," Perera said.

During his brother Mahinda Rajapaksa's regime as Sri Lanka's President, China started investing heavily in infrastructure projects in the island nation as Lanka faced international isolation at the tail end of the brutal civil war with the Liberation Tigers of Tamil Eelam (LTTE).

Critics say it was due to Mahinda that the country has fallen into the "Chinese debt trap".

The Hambantota port, which was funded by a Chinese loan during Mahinda's regime, was leased to Beijing on a 99-year debt-for-equity swap in 2017 after the country failed to pay off the debt.

Sri Lanka has historically been an important commercial hub along maritime routes due to its strategic position in the Indian Ocean, where China is increasingly making its inroads.

Paikiasothy Saravanamuttu, the executive director of the Center for Policy Alternatives, another independent think tank, dismissed the notion that Gotabaya was someone with an overly Chinese leaning.

He thought that Gotabaya would function true to his comments made at his inauguration, We want to remain neutral in our foreign relations and stay out of any conflicts amongst the world powers".

"He is more of a technocrat, not a politician, therefore, he would not adopt a stance of over-reliance on China, he would want to improve his relations with India," Saravanamuttu said.