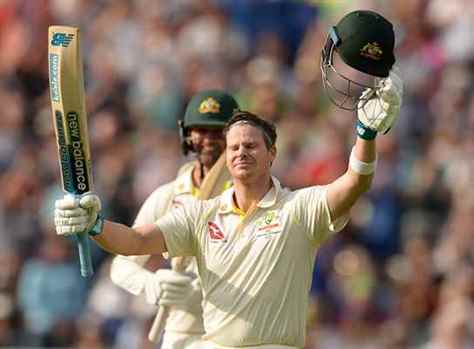 The Australia batsman has overtaken New Zealand captain Kane Williamson and is now only nine points behind Kohli, but the India captain will get a chance to consolidate his position in the two-Test series in the West Indies starting Thursday.

Marnus Labuschagne, who batted in the second innings as Smith withdrew on being concussed, has also moved up 16 places to 82nd position after scoring a determined 59 that helped draw the second Test to ensure Australia retained a 1-0 lead in the five-match series that kicked off the ICC World Test Championship.

Travis Head, who advanced two places to 18th after an unbeaten 42 in the second innings, is another Australia batsman to move up the rankings while Pat Cummins has gained one place to reach fifth position in the all-rounders list.

For England, player of the match Ben Stokes has moved up six places to 26th after scores of 13 and 115 not out at Lords while wicketkeeper Jonny Bairstow (up seven places to 30th), left-handed opener Rory Burns (up 17 places to 64th) and all-rounder Chris Woakes (up two places to 68th) have also moved up the rankings for batsmen.

Stuart Broad and Woakes have both gained two places in the bowlers list, moving up to 14th and 27th places, respectively, with four and three wickets in the match. Left-arm spinner Jack Leachs four wickets have lifted him from 48th to 40th position while Jofra Archer has entered the rankings in 83rd place after finishing with five wickets in his debut Test.Sri Lanka captain Dimuth Karunaratnes player of the match effort of 39 and 122 at Galle has not only helped his team take a 1-0 lead in the two-Test series with a six-wicket win but has also helped the opener move up four places to 8th position.

Former captain Angelo Mathews (up three places to 14th) and wicketkeeper Niroshan Dickwella (up five places to 33rd) have also moved up in the batting rankings while spinner Akila Dananjaya (up nine places to 36th) has made major gains among bowlers.

For New Zealand, left-arm spinner Ajaz Patel has advanced 14 slots to take 61st position after finishing with six wickets in Galle, including a five-wicket haul in the first innings.

Meanwhile, India could lose their top position in the ICC Test Team Rankings as even a 1-0 loss to the West Indies in their upcoming seires will see them slip to 108 points. That margin will be enough for the West Indies to overtake Pakistan to seventh position at 88 points.