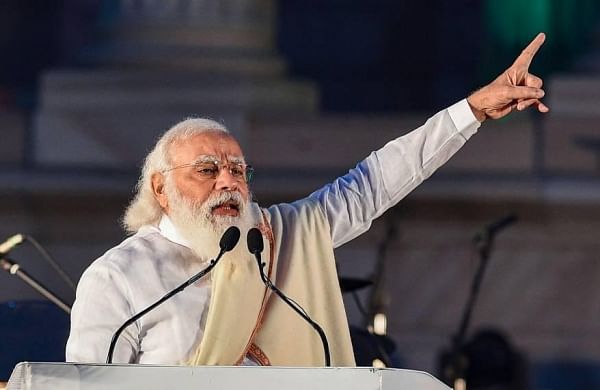 KOLKATA: Prime Minister Narendra Modi on Saturday sought to draw a parallel between Netaji Subhas Chandra Bose’s vision and his government’s action at an event to mark the legendary freedom fighter’s 125th birth anniversary in Kolkata.

Modi said Netaji would have been proud to see that the country has become strong and is following in his footsteps from the Line of Control (LoC) to the Line of Actual Control (LAC) with Pakistan and China respectively.

“Netaji had dreamt of a strong India, from LAC to LoC. We are following in his footsteps. Whenever our sovereignty was challenged, we have given a befitting reply,” he said at a programme held in the Victoria Memorial Hall to commemorate the freedom fighter. “Netaji wanted to build an Atmanirbhar Bharat. Today, India is heading towards the same goal,’’ said Modi.

The PM’s visit assumed significance ahead of the Assembly polls in West Bengal. Apart from recalling Netaji’s contribution, Modi’s speech projected the Bengal icon as the leading light of India’s Independence whose dreams the present government is trying to realize. “India is now manufacturing Tejas fighter aircraft. This is our vision to be self-reliant,’’ the PM said.

Modi also likened her party’s Sonar Bangla slogan with Netaji’s dream. “Netaji wanted to build ‘Sonar Bangla’. We will build his workplace the way he wanted,’’ said Modi. The ‘Sonar Bangla’ slogan has become a political tool of the BJP to attack Mamata-led West Bengal government over her party’s “poor” governance.

BJP heavyweights, including Home Minister Amit Shah and party chief JP Nadda never miss a chance to promise that the party, if voted to power, would turn West Bengal into Sonar Bangla within five years.
The PM also highlighted his government’s success in combating Covid-19 pandemic. Earlier, Modi went to Netaji’s residence and visited his museum. BJP leaders accompanied him, but were not allowed by the Netaji Research Bureau.

An irked Mamata expressed her discontent and declined to deliver speech at the event after slogans of Jai Shri Ram were raised in the presence of Prime Minister Narendra Modi. The awkward moment took place when the moderator of the event announced Mamata’s name as next speaker.

As Mamata stood up and started walking towards the podium, some of the audience chanted Jai Shri Ram slogan and said they would not want to listen her.

“I think government’s programme should have dignity. This is not a political programme. I am grateful to the PM and the Ministry of Culture that such an event has been organised. It (the slogan) doesn’t suit you to insult an invitee. In protest, I will not speak anything,’’ Mamata said.