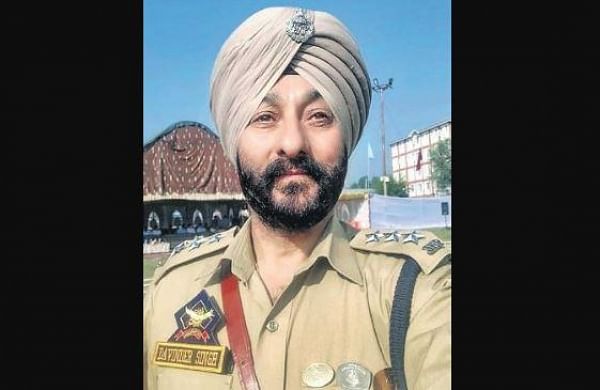 NEW DELHI: Suspended Deputy Superintendent of Jammu and Kashmir Police Devender Singh allegedly shared information including "sensitive" particulars with his contacts at the Pakistan High Commission which was grooming him to get some confidential details, officials have said.

While probing Singh's role, the National Investigation Agency (NIA) had cracked passwords of his "secure" social media accounts which indicated his involvement with some staffers of the Pakistan High Commission, who had since been repatriated following their role in espionage activities in the national capital, officials said here.

The NIA filed a chargesheet against Singh, at present lodged in Jammu jail, and five others on July 6 in a case of allegedly waging "war against India" with the help of Pakistan-based terror groups especially the Hizbul Mujahideen.

Before his arrest, Singh's last posting was at the crucial anti-hijacking unit of the strategic Srinagar airport.

Immediately after his arrest on January 11 this year, the Centre began the process of handing over the security of the airport to the Central Industrial Security Force (CISF) as a precautionary measure.

The others named are his brother Syed Irfan Ahmad as well as the group's alleged overground worker Irfan Shafi Mir, alleged accomplice Rafi Ahmad Rather and businessman Tanveer Ahmad Wani, former president of the Line of Control Traders Association.

In the chargesheet, the NIA gave details of his role alleging that Singh was "in touch with certain officials of Pakistan High Commission in New Delhi through secure social media platforms.

Investigation revealed that he was being groomed by Pakistani officials for obtaining sensitive information".

The chargesheet, which comprises 3,017 oral and documentary evidences, gives details about his contacts at the Pakistan High Commission and also about the information shared by him.

The officials said he had been sharing "sensitive information" from the latter part of 2019 but refused to divulge further details.

The officials said Singh was in close contact with a person identified as Shafqat, an assistant working with the Pakistani mission here.

The official was among the 50 per cent staff which was repatriated late last month.

The officials said Irfan Shafi Mir, an advocate who worked as an overground worker for the terror group, had always been negotiating with the High Commission officials and even receiving money on a regular basis.

Before his arrest, the accused had received a huge amount for organising seminars in Jammu and Kashmir and was tasked with fuelling unrest in the union territory especially in the Kashmir valley, they said.

Mir also visited Pakistan from where he allegedly carried information for the cadres of Hizbul Mujahideen in the Valley about the future course of action, the officials said.

Singh was arrested on January 11 this year along with Naveed Babu, Rather and the advocate when their car was intercepted by Jammu and Kashmir police near Qazigund on the national highway connecting the Valley with the rest of the country.

A search of the vehicle led to the recovery of an AK-47 rifle, three pistols and a cache of ammunition and explosives.

The NIA took over the case on January 17.

The investigation found that Singh, in an apparent bid to shield Naveed Babu, had shifted him along with the advocate to Jammu and arranged safe shelter for them in the city in February last year as well.

Singh used his own vehicle for the movement of the Hizbul Mujahideen terrorists and also assured them help in procuring weapons, the NIA alleged.

(THE NEW INDIAN EXPRESS)
308 Days ago