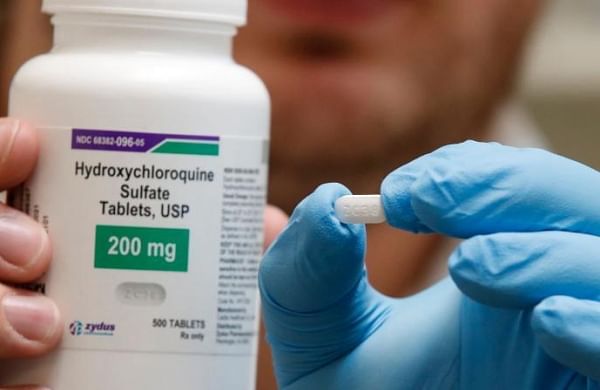 NEW DELHI: Sustained intake of anti-malarial drug hyrdoxychloroquine (HCQ) along with appropriate use of personal protective equipment (PPE) led to a significant decline in the odds of healthcare workers getting infected with the coronavirus infection, a study has indicated.

According to the findings of a case-control study published online in the ICMR's Indian Journal of Medical Research (IJMR) on Sunday, consumption of four or more maintenance doses was associated with a significant decline in the risk of SARS-CoV-2 infection among the study participants.

"Biologically, it appears plausible that HCQ prophylaxis, before onset of infection, may inhibit the virus from gaining a foothold," researchers said in the study.

The advantage of PPE usage was also independently indicated by the multivariate model, they said.

Healthcare workers (HCWs) are at an elevated risk of contracting COVID-19.

While intense occupational exposure associated with aerosol-generating procedures underlines the necessity of using personal PPE by them, high-transmission efficiency of the causative agent [severe acute respiratory syndrome coronavirus 2 (SARS-CoV-2)] could also lead to infections beyond such settings, the study said.

Hydroxychloroquine (HCQ), a repurposed antimalarial drug, was empirically recommended as prophylaxis by the National COVID-19 Task Force in India to cover such added risk.

Against this background, the current investigation was carried out to identify the factors associated with SARS-CoV-2 infection among HCWs in the country, the researchers said.

"It was identified that simply initiating HCQ prophylaxis did not reduce the odds of acquiring SARS-CoV-2 infection among HCWs.

"This dose-response relationship added strength to the study outcomes," the study stated.

It is worth mentioning in this context  that the National Task Force for COVID-19 in India recommended a once-a-week maintenance dose for seven weeks (400 mg once weekly), following the loading dose (400 mg bd) for HCWs.

Adherence to this recommended regimen is underlined by the findings of the study, researchers said.

"However, HCQ prophylaxis should be taken in tandem with PPE use as indicated by the multivariate model," they said.

The study stated that a recent registry-based analysis highlighted that HCQ did not offer therapeutic benefits to severe COVID-19 cases, and was associated with increased mortality.

This apparent disparity with the findings of the current investigation could be explained by the two different application contexts, it said.

"While the observational study involving registry-analysis focussed on the treatment of hospitalized COVID-19 patients, our emphasis was on the prevention of infections among HCWs.

In treatment settings, severe COVID-19 patients are likely to have a very high viral load and cytokine levels, which may not be improved by HCQ therapy," the study said.

The toxicities of HCQ are likely to be infrequent in healthy groups undergoing prophylactic therapy as observed in our study participants.

"Biologically, it appears plausible that HCQ prophylaxis, before onset of infection, may inhibit the virus from gaining a foothold," the study noted.

The three most common side effects of HCQ as reported by the cases and controls were nausea (8%), headache ( 5%)  and diarrhoea (4%).

While none of the controls on HCQ complained of palpitations, only one case reported the same.

Gastrointestinal symptoms such as acidity and vomiting following HCQ intake ranged from 0.6 per cent in cases to about two per cent in controls.

HCWs tested between the first week of April 2020 and the end of first week of May 2020 formed the sample pool, from which cases and controls were drawn.

Symptomatic HCWs testing positive on RT-PCR for SARS-CoV-2 were defined as cases.

Controls were symptomatic HCWs who tested negative on RT-PCR for the infection under similar considerations.

As many as 624 and 549 individuals could be contacted in the case and control groups, respectively.

The World Health Organization (WHO) has temporarily suspended the testing of the drug as a potential treatment for COVID-19 among infected patients in its global clinical trials following safety concerns.

On Tuesday, DG ICMR Dr Balram Bhargava had said that no major side-effects of the anti-malarial drug Hydroxychloroquine (HCQ) have been found in studies in India and its use can be continued as prophylaxis for COVID-19 under strict medical supervision.