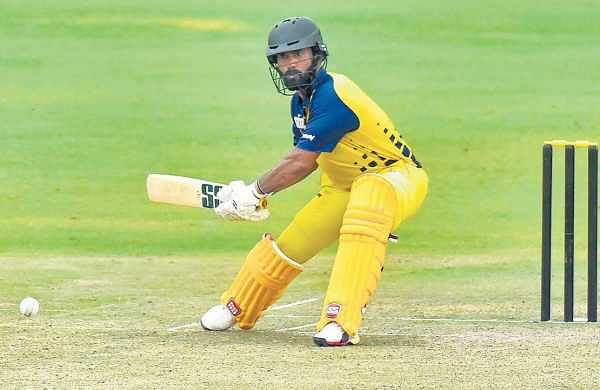 CHENNAI: Dinesh Karthik, who led Tamil Nadu to the finals in both the Vijay Hazare and Syed Mushtaq Ali trophy, is confident that the team will do well in the Ranji Trophy.TN will be meeting arch rivals Karnataka in their first game at Dindigul on Monday.

Since the hosts will be playing with almost a full strength squad, the expectations are high. “Our team is focussed. The expectations are very high. I think we are heading in the right direction. I think we need to take one step at a  time. We are in a tough group. We need to play well and we will definitely put our best foot forward,’’ said Dinesh Karthik.He was also in agreement with Vijay Shankar, who had recently told this daily that the mantra for success will be to play with a positive mindset.

“I 100 per cent agree with Vijay. Once you start thinking of taking 20 wickets  consistently it gives you a great opportunity to set yourself up for a good win. I think it is a very positive outlook. Having said that, conditions, weather, wickets too come into play. You want to know how much time you will have to play. Approach wise it is fantastic,’’ the KKR captain said.

R Sai Kishore is in the best form of his life and if he compliments R Ashwin, the TN attack will have lot of depth. “Both of them are bowling really. There is no reason why we cannot expect good results from them,’’ said Karthik.

The custodian, who made his first class bow 17 years ago, was engaging when he was asked about how he views the game currently. “I enjoy playing for TN. We have a good bunch of players. I always want to  perform  well for the state and share my experience with the youngsters . If that (performance) helps  me to play for India, there is no greater joy than  that,’’ said Karthik .

During the Syed Mushtaq Ali meet, there was criticism in the way he handled his bowlers but Karthik was of the opinion that someone or the other will be under bowled because of the depth of resources they have. “At one point, we had seven bowlers. Another (time) we had eight bowlers. So someone will be under bowled. It is easy to speak from outside. But as a captain at that point of time I did what I felt was right keeping in the mind the situation,’’ he clarified.

He also clarified his stance on why he told the state selectors to not consider him as a captain for the Ranji side. “There have been many captains who have led the Ranji side. I opted out as I thought that it was time for someone fresh to lead. Ideally the Ranji captain should be for two to three years or so. We have a good bunch of youngsters, Vijay has led the state in the shorter formats successfully. Baba brothers (Aparajith and Indrajith) are also young. I think these youngsters have it in them to take the team forward,’’ he signed off.