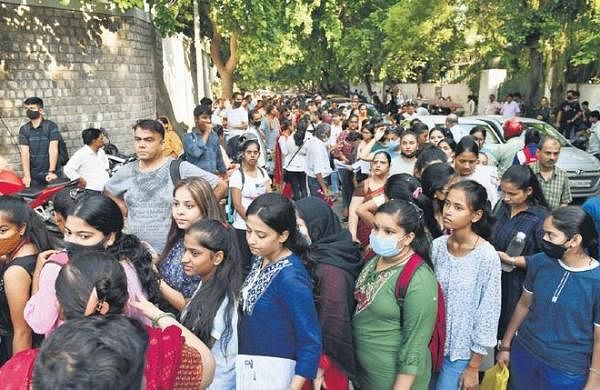 NEW DELHI: The fourth phase of the Central University Entrance Test (CUET)-UG 2022 began on Wednesday. However, exams in 13 centres, mostly in Delhi, were cancelled due to “unavoidable” technical reasons. This was despite the National Testing Agency (NTA) and the University Grants Commission (UGC) earlier claiming that a several measures had been taken after the second phase of the examinations in the first week of August resulted in cancellations across India.

According to UGC Chairman M Jagadesh Kumar, “Due to some unavoidable technical reasons, examination scheduled for today was cancelled in 13 centres in shifts one and two.” A total of 8,693 candidates out of 1,45,885 were affected, he said in a statement. Those candidates whose examination was cancelled would be informed regarding their new date on Thursday. “It is proposed to hold these exams on Aug. 25,” he added.

The last and the sixth phase of the examination is scheduled for Aug. 24, 25, 26 and 30 and about 2.86 lakh students would be appearing for it. These exams have been scheduled for students whose exams were cancelled during the second phase on Aug. 4, 5 and 6.