Their Vizhinjam dream is our nightmare: Father Eugene Pereira 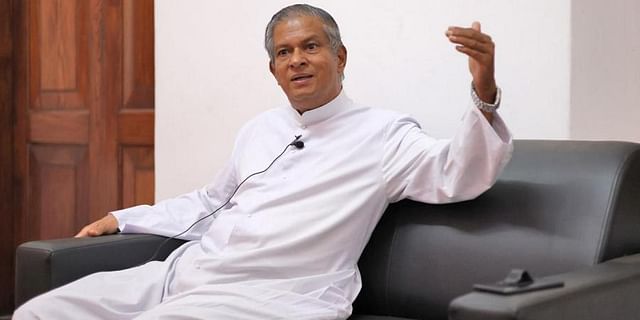 Fr Eugene Pereira is the face of the anti-port struggle in Vizhinjam. But when he links all the problems that are being faced by the coastal community to the upcoming project, one feels he is stretching it too far. Excerpts of his conversation with TNIE.

You have been protesting against the Vizhinjam port for the past few months. What are your concerns?
The lives and livelihood of fisherfolk are under threat. Our struggle is for them. A visit to the coastal villages tells one about the impact caused by the port construction.

The project started almost 10 years ago. At that time, the Latin Church backed the project. Now, the Church demands that construction be stopped after so much investment has been made…
We were not privy to many things. Even the public hearing was stage-managed. They created a situation that prevented us from expressing our opinions. Yet we prepared a report raising the concerns of the people. But nobody bothered to listen to us. We have always been against the project, from the very beginning.

But there are videos in which former archbishop M Soosa Pakiam himself speaks about the necessity of the port…
What is in circulation is only a part of what he said then. It is wrong to extract a portion and present it as the general truth.

But in that portion, he is seen vociferously advocating the Vizhinjam project…
There was a lot of hype that the project would turn Thiruvananthapuram and Kerala into Singapore. The Latin Church has a history of contributing to development projects. VSSC, Titanium factory, and airport are examples. It is with the same mindset that Soosa Pakiam approached this project. He has also made it clear that the project should be allowed to progress only after addressing the concerns. But the government decided to go ahead ignoring us. There were a lot of vested interests involved and the agencies, including INCOIS (Indian National Centre for Ocean Information Services), were under pressure from the powers that be to run roughshod over genuine issues.

The UPA was at the Centre, and the UDF was ruling the state then. So, you mean to say the Congress governments went out of their way for vested interests?
Yes, something fraudulent did happen then. The CAG reports are proof of this.

The general perception is that the Latin Church is making an unrealistic demand of stopping construction work at this juncture, when more than 60% of the work has been completed. Why this delayed protest?
The construction started in 2015. People realised its impact by 2017-18, when they lost the coast and houses. There were protests then, too. Floods in 2018 and the Covid pandemic delayed the protests. Kovalam is in ruins; so is Shankhumukham beach. Even the road leading to the domestic airport was damaged.

But coastal erosion is not restricted to Vizhinjam. It is a universal phenomenon and is directly linked to climate change. That being the case, how can you link that to the port construction?
It is a proven fact world over that such hard-structure constructions in the sea causes coastal erosion. In Vizhinjam, the next stage is the construction of a breakwater in the deeper parts, which requires large boulders from the Western Ghats. The destruction of the Western Ghats is also a serious problem. You just walk from Kovalam to Shankhumukham to see the impact on the coast.

But most of the Shankhumukham beach has returned…
Shankhumukham used to have a vast beach. Now there is a slight beach formation as no dredging took place at Vizhinjam recently.

The Vizhinjam port had approval from expert bodies like NGT and INCOIS. So you think all these approvals were fabricated?
NGT (National Green Tribunal) issued a nod with 14 conditions. It includes monitoring by an expert committee, and study reports every six months. However, the reports are meant to support Adani. They are going ahead with the project by ignoring these truths.

The state government, too, constituted an expert committee. Would you trust that?
The government has not included the experts we had suggested. Also, the Terms of Reference (ToR) for the study also have not been finalised yet.

What exactly are your demands, other than stopping the port’s construction?
We started the protest with seven demands on July 20, 2022. They include shifting over 300 families living in camps to rented houses, a permanent rehabilitation programme, strengthening the weather warning system, effective alerts to the public, subsidy for kerosene used in fishing boats, and ensuring smooth navigation at Muthalapozhi harbour.

Is rehabilitation your main concern?
It is an important one. But there should be a resolution to other issues as well. It is an issue of the entire state. It causes ecological and economic damage to the state.

If all six demands are accepted, would you back off from opposing the construction as the port is in its last phase?
No. Also, who said construction is in the last phase? Adani informed the court that 80% of the work is over. But, when it comes to environmental impact, they declare that only 33% of work is over and, hence, impact on the coast is not due to the construction.

The general perception is that though the issues faced by fishermen are genuine, the Church is trying to take advantage of the situation for political gains.
I don’t know on what basis such opinions are formed. All sections of fishermen are part of the protest.

You started protests when the state government was going ahead with arbitration against Adani Group, seeking a fine for not completing the project on time. Now, Adani Group finds the protest an excuse for the delay. So there is an allegation that the protest at this juncture would help Adani…
We didn’t start the protest during the Covid period, as the public would have got a wrong impression about us. But we had given six petitions earlier to the government in both terms. What should we do if the government is not addressing them?

Even the High Court has stated that protection should be given for construction. Aren’t you violating the court directive?
The HC said transportation of materials should not be affected. That’s being done through different ways to the port. Had the government taken measures to address the concerns with the right resolve, these incidents could have been avoided.

Not all fishermen are against the port. How can you speak for the entire community?
We are protesting for the sake of all fishermen. We have only demanded that construction be put on hold and issues be addressed.

MP Shashi Tharoor has maintained that he supports the Vizhinjam project. Why is the Church not able to convince him despite being a crucial force in ensuring his victory thrice?
We had tried in the initial phase. We petitioned him about the matter several times. Had he used his expertise in addressing the concerns raised by those at the receiving end, this issue could have been resolved long ago.

If he contests in another Lok Sabha election, what will be your stand?
It’s yet to be known whether he would contest to the Lok Sabha or assembly; or whether he is eyeing chief ministership. (Chuckles)

Tharoor has an image beyond that of a Congress MP. When a person like him takes a position in favour of the port, isn’t it only natural that the Church comes under the scanner?
We hope he changes his position soon for his own good.

The general perception is that the Latin Church is pro-Congress. Is it true?
No. In that case, the UDF would not have won just one out of the 14 seats (in Thiruvananthapuram) in the last assembly polls.

There are allegations that the Church is unhappy with the LDF government because it is dealing with the fisherfolk directly, without going through the Church as has been the practice so far…
These are wrong assumptions. The fisherfolk believe that only the Church is standing up for them.

Is the Latin Church afraid that it is losing its monopoly over the fisherfolk?
The Church never takes any unilateral approach. From the very beginning, we have been maintaining that the primary focus should be to maintain peace.

But a speech by one of the priests, egging on protestors to burn down the police station, has gone viral…
We don’t justify that statement at all. But you must understand under what circumstances such statements were made. Who issued orders to throw grenades without any warning? There are several unexplained actions behind the whole issue.

Aren’t the police duty bound to arrest those who violate the High Court order?
The police have named even the bishop, who was not present on the occasion, as an accused. It’s a planned move to wrongfully term us the accused in front of the court. We demand a judicial probe.

The all-party meeting held recently has supported the port construction. Don’t you think the Latin Church is alone in this fight now?
The all-party meeting was a one-sided farce. Neither were the fishermen’s bodies called nor were they given an opportunity to be heard. What happened on November 26 and 27 is part of a premeditated plan. They want to weaken our case before the court. That’s why the archbishop and auxiliary bishop have been named as accused.

Is it true that there’s an opinion within the Latin Catholic community that the Church shouldn’t have taken up this agitation?
The Church took up the agitation after numerous discussions. Also, it’s not an agitation by the Church, but by the people.

There is a perception that the Latin Church is attempting a second ‘Liberation Struggle’…
No, never. These are just propaganda to paint the agitation in bad light. The Church is not at all keen on any more liberation struggles.

Have you, at any stage, tried to meet the chief minister?
During the agitation, I, along with the bishop, met the chief minister. He said construction could be stopped, but promised to entrust someone to look into the other demands. The government should have taken further steps in that direction.

Why is the Church insisting on the demand to stop construction? If other issues are addressed, will you retract this demand?
It’s a project that can cause damage to the environment and people. We are talking about entire society.

At some point, this tussle should end. So, is the Church interested in nominating someone to mediate so as to end the deadlock?
If Shashi Tharoor is ready for such a mission, we are open to discussions.

The Vizhinjam port was a ‘dream project’ of Oommen Chandy...
Not just Oommen Chandy, now it’s the dream of some others, too. Someone’s dream can be a nightmare for others.

Can we see Fr Eugene Pereira emerging as a candidate in the coming elections?
My politics is people’s politics. I’m not interested in party politics. I take up people’s issues.

Is it true that AAP leaders have contacted you?
Yes. (AIR NEWS)