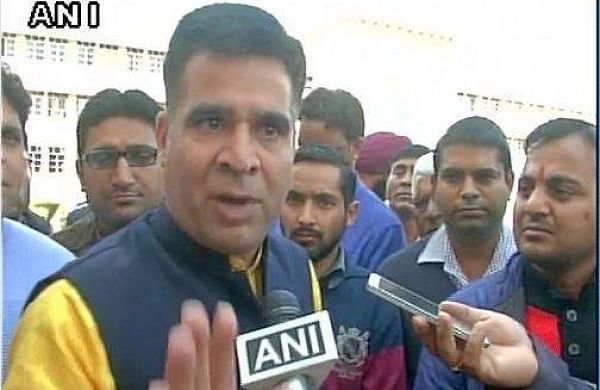 JAMMU: Jammu and Kashmir BJP chief Ravinder Raina on Tuesday accused PDP president Mehbooba Mufti of having "Talibani ideology" and said anyone who celebrated Pakistan's recent win over India in a T20 World Cup match would be jailed for "conspiring" against the country.

Mehbooba Mufti, the former chief minister, on Monday had called on people to take Pakistan's win over India in a T20 World Cup match in the right spirit, amid reports of anger against Kashmiris for celebrating the neighbouring country's victory.

Pakistan beat India by 10 wickets in a Super 12 game on Sunday in their first win over their arch-rivals in a World Cup match in their 13th attempt.

"Some leaders need security cover and are protected round-the-clock by our forces but their heart beats for Pakistan. Mehbooba is of Talibani ideology and she is answerable to the people for supporting an enemy nation which is pushing armed terrorists, conspiring against us and bleeding J&K. She has committed a grave sin," Raina said.

Talking to reporters on the sidelines of a function organised by his party to celebrate 'Vijay Diwas' (accession day) at Maharaja Hari Singh Park here, the BJP leader said those who have conspired against the country by celebrating Pakistan's win cannot be spared.

"Anyone who poses a threat to the territorial integrity and sovereignty of our motherland will be bulldozed and crushed. FIRs have been registered against those who celebrated Pakistan's win in Kashmir and elsewhere and created a ruckus under a conspiracy are being identified. Police, CID and NIA are taking action against them and all of them will be put in jail," Raina said.

Six people were detained in Samba district, while several FIRs were registered against those who celebrated the victory of the Pakistan cricket team.

The national flag was also hoisted on the occasion.

Accession Day marks the signing of the instrument of accession by the maharaja with the governor-general of India, Lord Moutbatten, on October 26, 1947 to join the then dominion of India.

"Vijay Diwas is like Republic and Independence day for us as this was the day when our maharaja made J&K an integral part of India some parts of Jammu and Kashmir are still under the illegal occupation of Pakistan and China and the day is not far when we will hoist the tricolour there as well," Raina said in his address to the gathering.

In his address, Union minister Singh recalled the historic movements of the signing of accession and the defeat of Pakistani raiders who tried to control the Srinagar airport and said the work started by the maharaja was completed by Prime Minister Narendra Modi by revoking the Article 370 on August 5, 2019.

After the historic step, the accession of Jammu and Kashmir with India is complete, he said, adding that "neither Pakistan nor China or for that matter Taliban can think of taking over J&K from us".

Former MLA Devender Singh Rana said Pakistan is not learning the lessons from history and repeatedly attempting to disturb the situation in Jammu and Kashmir.

"They have suffered defeats and will face the same fate in future as no conspiracy will be allowed to succeed. The temporary accession was made permanent on August 5, 2019 under the present dispensation which strengthened J&K and the country, Rana said, highlighting the contribution of the maharaja.

He said Jammu and Kashmir was and will remain the integral part of India.