Those seeking 'azadi' in Jammu and Kashmir must be integrated with `Bharat': Mohan Bhagwat 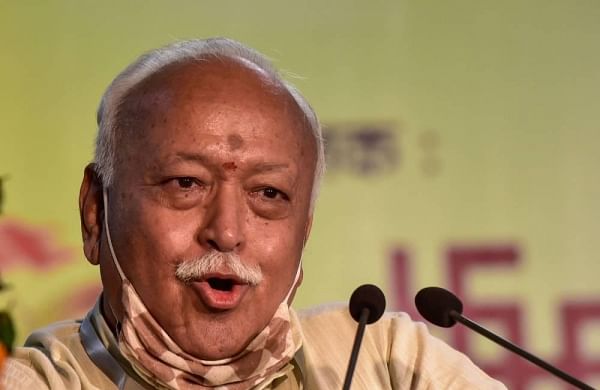 NAGPUR: RSS chief Mohan Bhagwat on Saturday said the abrogation of Article 370 which had given a special status to Jammu and Kashmir has not solved the problem completely, and there is a section of population there which still speaks of "Azadi" (independence).

Speaking at a book launch function here, he said society must reach out to this section so as to integrate it with "Bharat".

He visited Kashmir recently and saw that abrogation of Article 370 in 2019 has paved the way for development in the region, Bhagwat said.

He also saw Muslim students from Jammu and Kashmir stating during a program in Mumbai last month that they wanted to be part of India and now they could be Indian without any barrier, he said.

Earlier, Jammu and Ladakh faced "discrimination" and 80 per cent of the resources spent on Kashmir Valley went into local leaders' pockets without benefiting people, the RSS chief said.

Now this has changed and people's lives there are "happier", he claimed.

Article 370 also came in the way of taking action against terrorists but now nobody fears terrorists, he added.

"People who had put stones in the hands of their children instead of books have stopped praising them (terrorists).

There is an open atmosphere. Tomorrow elections will be held and new government will be formed," the RSS chief said.

But sometimes we get complacent and lethargic when "hurdles are removed", Bhagwat said, adding, "The problem has not gone away.

"There is one section, which persuaded by Pakistan and with communal feelings in the heart says (demands) Azaadi (freedom/independence). And these sections are still there," Bhagwat said.

Many in Kashmir identify with Indian nationalism, he said.

But there are some others who are happy that "corrupt leaders have gone to jail" and there is development, but "in their hearts they feel even with all this, if we get independence, it will be good," Bhagwat said.

"And the problem lies there," he added.

"We will need to speed up efforts for assimilation," the RSS chief said, adding that Indian society should take benefit of the "good atmosphere" prevailing now and "reach out to all of them and establish close relations make them feel that they belong to Bharat."