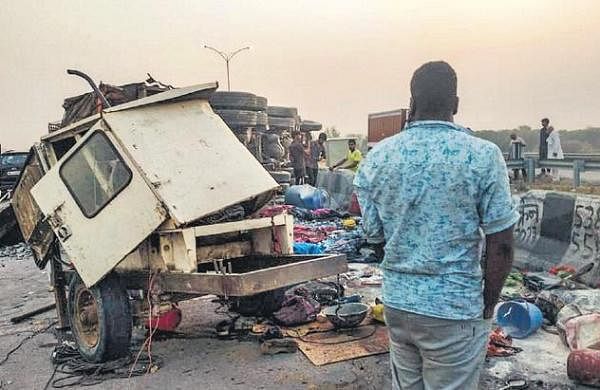 CHANDIGARH: Three migrant labourers from Uttar Pradesh were killed and 11 others were critically injured when a truck ran over them near Aasoda Toll Plaza on the Kundli-Manesar-Palwal (KMP) Expressway in Bahadurgarh area of Jhajjar near Delhi in the wee hours of Thursday.

The truck loaded with coal rammed into the median divider and veered towards a group of about 18 migrant labourers who were sleeping on the roadside. The driver of the truck with a Rajasthan registration number fled from the spot, police said.

Eleven injured workers were rushed to Civil Hospital in Bahadurgarh town from where 10 were sent to the PGIMS-Rohtak given their critical condition. Three succumbed to their injuries. While the deceased are yet to be identified, sources said many of those who died and were injured were from Kanpur and from other places, including Kannauj and Farrukhabad, in Uttar Pradesh.

Superintendent of Police, Jhajjar, Waseem Akram said that the labourers were engaged in repair work on a bridge and used to sleep on one side at night. They had also put up temporary barriers and duct tape around them before going to sleep.

A police patrol party had on Wednesday evening advised the labourers not to sleep at the site at night in view of the risk posed by moving vehicles. But after preparing the dinner, some of them slept there. The SP said the police will initiate action against the contractor and other individuals for letting the labourers sleep at the site.