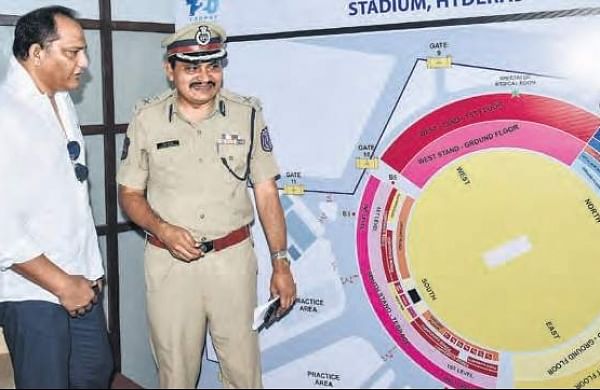 HYDERABAD: Foolproof security arrangements are in place at Rajiv Gandhi International Cricket Stadium at Uppal in Hyderabad for the smooth conduct of the T20 International match between India and the West Indies on Friday.

Around 1,800 personnel from different wings of Telangana police will be deployed in and around the stadium. Around 300 CCTV cameras were also installed at the venue and its surrounding areas.

To ensure that there would be no untoward incidents on Friday, which incidentally is first the anniversary of Bari Masjid demolition after the recent Supreme Court verdict on the issue, the police have taken adequate security measures.

Spectators are not allowed to carry laptops, banners, water bottles, cameras, cigarettes, electronic items, among others.

To ensure the safety of women spectators, a separate SHE Team team has been established. Traffic restrictions with route diversions and prohibiting entry of heavy vehicles is also imposed from afternoon till late night on Friday.

The spectators will not be allowed to park any vehicles on either side of the main road from Genpact to Uppal ring road and Uppal Ring Road to Vishal Mart, Ramanthapur. The vehicles have to be parked only in areas specified by the TSIIC. Metro Rail will also operate services until 1 am for the convenience of the spectators.

In addition, a joint command and control room is established at the stadium to monitor all the CCTV footages for taking immediate action. Anti sabotage checks would continue round the clock until the match is completed.

Scanners installed at the stadium will allow police and other security personnel to detect explosives and other prohibited material inside the venue.

Services of the bomb disposal team and sniffer dogs were pressed into service to ensure safety in the stadium and parking places. Check posts have also been set up at all entry points of the stadium to carry out anti-sabotage checks and frisking of people. Separate teams will also check the movements of antisocial elements.