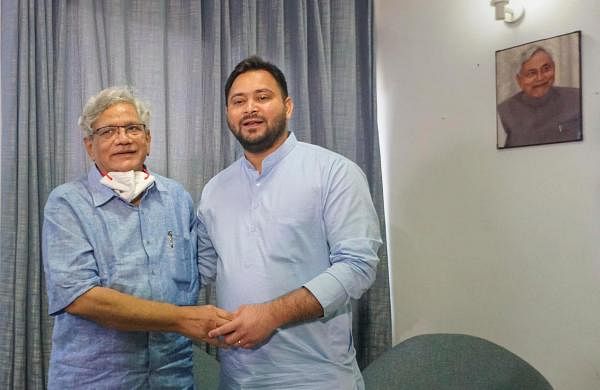 NEW DELHI: Bihar Chief Minister Nitish Kumar’s decision to join the Mahagathbandhan was a “slap on the BJP’s face” and a similar realignment of Opposition forces will happen across the country now, RJD leader and Deputy CM Tejashwi Yadav said after meeting Congress president Sonia Gandhi in New Delhi on Friday.

Tejashwi also met CPM general secretary Sitaram Yechury and CPI leader D Raja. During his meeting with Sonia at her 10 Janpath residence, discussions were held on cabinet expansion in the state, Opposition unity in the country and raising people’s issues like price rise and unemployment, sources said. The RJD leader briefed her on the new political arithmetic in Bihar.

Talking to mediapersons after the meeting, Tejashwi said, “Nitish ji’s timely decision is like a slap in the face of the BJP. Except for the BJP, all political parties are one in Bihar. This will happen across the country now. People are tired of unemployment, inflation and religious clashes. It’s time for all opposition parties to come together and make a strategy for future.”

Accusing the BJP of working to kill the regional parties, the Bihar Deputy CM said democracy will be finished if the regional parties perish. He exuded confidence about running the Mahagathbandhan government smoothly for the second time and providing good governance.

Tejashwi also pooh-poohed the BJP’s allegation that the coming together of the RJD and the JD-U was part of a deal. “It not part of any deal. It is a natural alliance… Bihar will emerge as the largest job provider state during this phase of Mahagathbandhan,” he asserted.

Asked about the deadline set for providing 10 lakh jobs to the youth, as promised by his party before the elections, Tejashwi said the process would start soon after winning the trust vote in the assembly.

Describing the political realignment in Bihar as worth emulating, the RJD leader said what the state had done to take on the BJP’s autocratic and political hegemony needed to be followed by others, too.

When asked about the BJP’s allegation that the RJD’s return to power would bring back ‘jungle raj’ in Bihar, Tejashwi said the real jungle raj prevails at the Centre where no one is allowed to raise their voices against injustice and hatred.

Tejashwi, Giriraj in war of words
Bihar Deputy Chief Minister Tejashwi Yadav and Union minister Giriraj Singh on Friday entered a bitter verbal duel on social media, with the RJD leader accusing the BJP MP of sharing an edited video to show him in a bad light.

The war of words began when Giriraj tweeted a video clip in which Tejashwi is seen saying, “I had made the promise of providing 10 lakh jobs upon becoming the chief minister. At present, I am the deputy chief minister.”

Tejashwi responded by posting a longer clip of the same media interview, in which he can also be heard saying, “ ... but I have discussed the matter with Chief Minister Nitish Kumar, who has taken it seriously. We will honour our promise and provide jobs.”