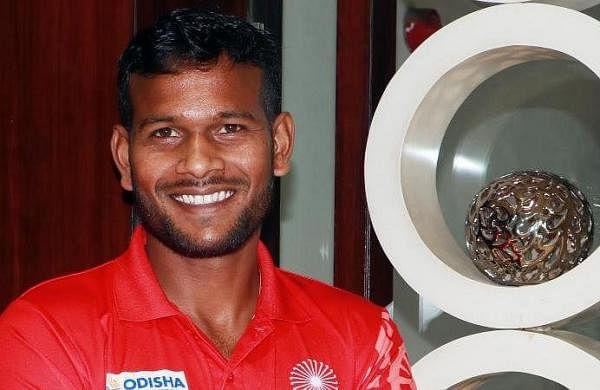 ROURKELA: Hockey fraternity in Sundargarh district, the cradle of field hockey, plunged into celebration with the end of the Olympic medal drought for India.

The euphoria and joy doubled with a lad from the soil of Sundargarh Amit Rohidas (28) in his first Olympic games producing a stellar performance in the bronze medal win for India against the mighty Germans in a nail-biting match on Thursday morning.

Back at Amit’s village Saunamora in Balishankara block, about 120 km from Rourkela, his family members are on cloud nine with India’s historic medal win after 41 years. Saunamora is also the native village of former India skipper and hockey icon Dilip Tirkey.

Amit’s elder brother Ranjan, mother Golapi, sister Sushmita, sister-in-law Dushmanti, and other family members watched the roller-coaster match on television and burst into celebration once the team sailed past Germany with 5-4.

Ranjan, a farmer, said shortly after the match ended Amit called them from the field and we congratulated him and shared his happiness together, adding the conversation lasted few minutes as he was busy.

Ranjan said we are excited and overwhelmed at the achievement of Amit who helped India bring the glory of making his village, Odisha, and India proud. Amit is the first non-tribal player from Sundargarh and the youngest among five siblings.

ALSO READ | 'India lost because it has too many Dalit players': Casteist slurs thrown at hockey star Vandana Katariya’s family

Ranjan recalled they come from a poor agrarian family, but with Amit rising in his career he has taken the responsibility of supporting his family and they are in a better position over the past five-six years.

Amit during an annual talent hunt was picked up and brought to the Rourkela-based Panposh Sports Hostel (PSH) under the tutelage of hockey coach Bijay Lakra, whose native house at Saunamora is just 200 meters away from Amit’s house.

Lakra said he felt personal fulfillment at the performance of Amit throughout the Olympic matches and he was particularly impressive and in today’s match stealing the thunder and caught the attention of commentators and hockey lovers. Amit had made life difficult for the opponents in the penalty corner region and was acting as a second goal-keeper to help India bag the bronze medal after four decades, he claimed.

Lakra said Amit’s father Golap Rohidas was his bosom friend and he felt sad that he was not alive today to see the achievement of his son.

Incidentally, family members of two-time Olympian Birendra Lakra, a native of Lachchhda village in the remote Gurundia block, also celebrated India’s historic win. Lakra, a renowned defender and product of the RSP-run SAIL Hockey Academy (SHA) for some reason did not play the semi-final or Thursday’s match.

Birendra’s married sister Sunita Lakra and his niece at Rourkela watched the medal-winning match on television. Sunita said Birendra called her over the phone and she congratulated him and the team, adding they are very happy at the team’s victory.