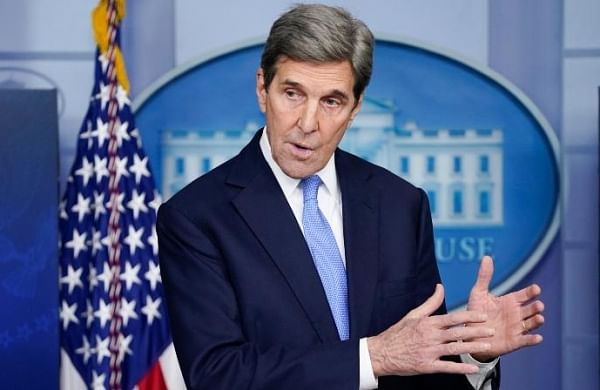 NEW DELHI: US Special Presidential Envoy for Climate John Kerry on Tuesday said he has told the Indian government it is urgent to raise climate ambitions further and that he's confident it will make some announcement going to the UN Climate Change Conference of the Parties (COP26) in Glasgow.

He also said that if India succeeds in deploying 450 gigawatts of renewables by 2030, it will be a major contribution by a developing country towards efforts to keep the world's temperature increase held at 1.5 degrees Celsius.

"And I personally urge that the government think about frankly announcing that as part of the Nationally Determined Contribution (NDC)," he said.

Kerry is on a three-day visit to India for talks to address the climate crisis as he tries to align the US efforts ahead of the 26th Conference of the Parties (COP26) to the United Nations Framework Convention on Climate Change (UNFCCC), which will be held from October 31 to November 12 in Glasgow, United Kingdom.

"I said to them this is urgent. We have to get this done. People have not said to me explicitly no or yes.

I did not meet with anybody who said that's a crazy idea and we are not going to do that," Kerry told reporters at a press roundtable here when questioned if he asked the Indian government to raise its climate ambitions further.

"It is the prime minister's prerogative. Internal deliberations need to take place in India to make that decision. I am confident India is going to announce one thing or another going to COP as will many other nations you haven't heard from yet," he said.

Kerry said the two sides did not spend a lot of time discussing Net Zero and they focused on what they need to do now.

"If you don't care enough by 2030, Net Zero is not achievable. We really focused on the concept of NDC and what we all can do to help deploy 450 GW (of renewable energy)," he said.

A net zero target means balancing out the amount of greenhouse gasses emitted into the environment by removing an equivalent volume.

This may be achieved by various modes, including restoring forests or through direct air capture and storage (DACS) technology, according to the World Resources Institute.

"The discussions I had with folks here was about how we do this together. How do we work in order to raise the ambitions and how do we help you with your 450 GW," he said.

Kerry said India is already ahead of a lot of countries in the deployment of renewables and that the US wants to work very closely with India and do whatever it can to help accelerate it.

"Why? Because it's a big number and it's an ambitious goal and if India succeeds in that deployment, it will be a major contribution by a developing country to the efforts to keep the world's temperature increase held at 1.5 degrees Celsius," he said.

Kerry shared that India and the US will also jointly work on green hydrogen.

To a question on restrictions on funding for some international NGOs working in India on climate change, Kerry said, "It is the US's position, broadly, for any country in the world that we think vibrant exchange with civil society is very critical and contributes to the process.

"I don't know the circumstances what happened here so I will not try to express criticism on something I am not aware of."

This is Kerry's second visit to India in around five months.

"I came back now, before COP26 in Glasgow, because India already plays a critical role in global climate response and we wanted to give greater life to what President (Joe) Biden and Prime Minister (Narendra) Modi announced at the April 22 Summit 'India-US Climate and Clean Energy Agenda 2030 Partnership'," he said.

"I think we had terrific agreement with all the ministers I met who are deeply committed to making sure India is doing its part and that our partnership is also growing and thriving," Kerry said.

He said the US has also appointed a seasoned Foreign Service official, Robert O Blake, to help develop the US-India climate and clean energy partnership.

Kerry said keeping global warming to 1.5 degrees Celsius as compared to pre-industrial levels is a tough target but doable.

"President Biden has announced to reduce emissions by 50-52 per cent from 2005 level over the next ten years.

Is that an arbitrary number? No! That's what scientists have told us we need to do," he said.

"The IPCC report and others say minimum of 45 per cent reduction. We are reaching for more. Trying to push the curve as are Europe, UK, Japan, and Canada. that's 55 per cent of global GDP.

And, now from getting India to come on board and other countries will grow our capacity to hold on to 1.5 degrees Celsius. So, It's a heavy lift but doable," he said.

It's not doable if countries do not come together and reduce enough in the next 10 years, Kerry said, adding these 10 years will decide if 1.5 degrees Celsius is achievable and whether Net Zero is achievable by 2050.

The climate crisis can be addressed, but no one nation can do it by itself, the US special envoy said.

"And, we have to get 20 largest economies in the world moving faster in order to meet our goals."

Kerry said though he had healthy conversations during his recent visit to China, the two sides have not yet agreed on "some components of larger choices of how we address the crisis".