Topple us and we will bring you down, KCR dares Modi 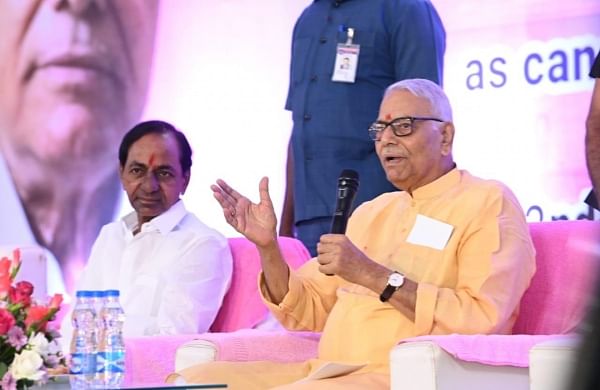 TRS went on to dare the BJP to try and topple the Telangana government so that he could bring down the Modi government at the Centre. Rao claimed the BJP has pulled down elected governments in nine states.

"Several union ministers, presently in Hyderabad, declare they will topple the TRS government as they toppled the government in Maharashtra. It is okay. We are also waiting for the same. So that we can be free. Later, we will bring you down (Modi government) in Delhi. From crisis comes a revolution, always," Rao thundered at a meeting of TRS MPs and MLAs, organised to introduce the United Opposition's presidential candidate Yashwant Sinha.

"Modi is successfully killing democracy every day. Killing the federal structure of the country. We have over 100 MLAs and our friendly party (read AIMIM has seven MLAs. The BJP leaders are saying that they will pull down my government," Rao noted.

While posing several questions to Modi, including the failure of doubling the income of farmers, Rao wanted the Prime Minister to answer all these questions at the two-day BJP's national executive meeting underway in Hyderabad.

"What happened to Bhrastachar Mukt Bharat? Why is the rupee falling against US dollar? Why farmers are insulted in this country? Why does your government fail to implement election promises? If your guiltless man, answer all these questions in BJP's national executive meeting, Rao told Modi. Rao wondered whether the black money was brought back to the country as assured by the Prime Minister, if so where is it?

Rao also found fault with the Modi government's foreign policy. "Modi thought that US presidential election is like Ahmedabad municipal election. Modi supported Trump, who was defeated, which ultimately damaged the reputation of the country", Rao said. Rao said that the country's image was tarnished across the world, after allegations levelled against Modi government in Sri Lanka.

Finally, Rao told Modi that "Modi thinks that he is Brahma and permanent. Modi is the 15th Prime Minister of this country.  No one is permanent in democracy. Change is not impossible. So many Prime Ministers changed in the country".

Rao said that he had entire information about how many merchants became richer in this country under Modi's rule and added that he would reveal this information at an appropriate time.

Rao introduced Yashwant Sinha to party MPs and MLAs. "Sinha is a towering personality and former IA office," Rao told party leaders and asked them to vote for Sinha. Rao wished that there was a need for a change in the country.

Sinha said that the country needs a leader like Chandrasekhar Rao. "Rao posed several questions to Modi. But, Modi will not reply as he has no answers," Yashwant Sinha said.

He pointed out that Modi never addressed a press conference in his eight-year tenure. Modi had no guts to face the media, Sinha alleged. He thanked Rao for supporting his candidature. "Peoples' movement started in the country. There will be no threat to the democracy, as long as Telangana and TRS are there. Our fight will not stop with the completion of the presidential poll. It will continue in the future too. We will continue the nationwide fight along with KCR and TRS" Sinha said.