Tour of Duty Entry in forces likely by May-end 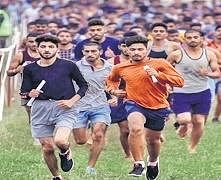 NEW DELHI: The entire process of recruitment at the soldier level is set to undergo a sea change as the Department of Military Affairs is busy giving final touches to the Tour of Duty (ToD) proposal to address manpower scarcity in the forces.

The proposal might get implemented at the end of this month, said a source. Once that happens, recruitments for soldiers, sailors and airmen will be done under ToD entry, which will be only for four years, including a training period of six months, the source added.

Efforts are being made to make it an attractive proposition for the recruits, with a severance package and a certificate/diploma that will help in post-military employment.The three forces are currently facing manpower crunch since no recruitments have taken place for past two years.

Currently, soldiers join the forces between 17.7 years and 21 years of age and serve a minimum of 15 years before retirement. Under ToD, the permanent cadre will be inducted once their cycle of four years gets completed. “Once these soldiers go home, they will be freshly inducted as permanent recruits after going through a selection board,” said an officer. The rigours involved in selection won’t change, but there can be some changes in the induction process.

“The plan is to conduct the written exams first so that only those meeting the eligibility condition are called for physical tests, thus reducing the chaos during the recruitment rally,” the officer added.Listing another positive of the ToD proposal, the officer said the average age profile of the units will be younger --- from 35-36 years, it will go down to 25-26 years. (THE NEW INDIAN EXPRESS)