Tractor parade: Violence is not the answer, says Rahul Gandhi 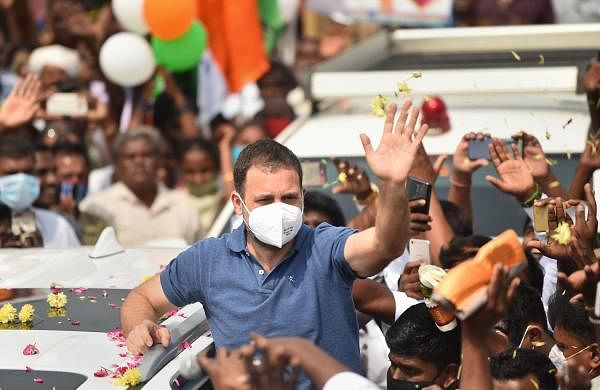 NEW DELHI: After clashes broke out between the agitating farmers and the police in Delhi during the tractor march, Congress leader Rahul Gandhi on Tuesday denounced the violence.

He tweeted in Hindi, "Violence is not the solution to any problem, whoever gets injured the loss is of the country. In the interest of the country the farm laws should be withdrawn."

Farmers riding their tractors and bikes arrived at the Red Fort with the Indian National flag in their hands.

Visuals showed farmers assembled in front of the Red Fort even as hundreds of farmers clashed with the Delhi Police personnel near ITO intersection in central Delhi, which turned into a war zone on the eve of the Republic Day.

The visuals also showed several farmers entering into the iconic Red Fort premises, as the security personnel were outnumbered by the farmers.

The Prime Minister hoists the national flag on August 15 here, which marks the country's Independence Day every year.

Meanwhile, the agitating farmers at the ITO intersection clashed with the Delhi Police personnel as they pelted stones and charged the policemen with their tractors.

The police fired several rounds of tear gas shells and also resorted to lathi-charge on multiple occasions as the farmers remained adamant to move towards Red Fort.

The Rapid Action Force (RAF) was soon deployed at the ITO intersection.