Turned away by neighbouring states over Maoist fears, displaced Bastar tribals have nowhere to go 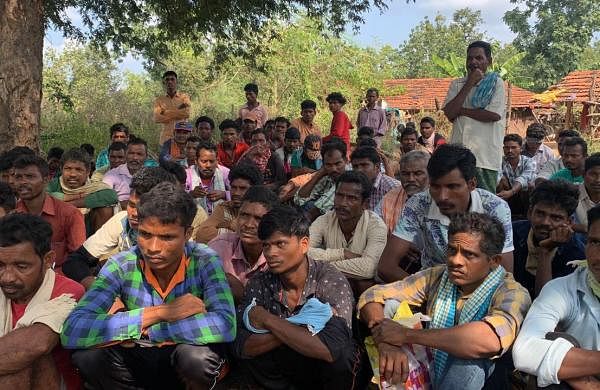 RAIPUR: Thousands of tribal families who are stated to have migrated from the Bastar region (south Chhattisgarh) following the outrage of Maoist terror to the adjoining states, some 15 years ago are now struggling with a new dilemma over their lost identity and living under duress to return. What added to their plight is the claim of the Chhattisgarh government that "no tribal family shifted from Bastar owing to Maoist menace".

The persisting issue of rehabilitation and resettlement of these internally displaced persons (IDP) who were earlier cited as inhabitants of over 600 Bastar villages continues to hang fire. Of late, the states of Telangana and Andhra Pradesh (AP) have reportedly begun nurturing an apprehension that the outlawed CPI (Maoist) might use the clusters of these migrated populations as their launching pad and again reinforce their presence.

These tribals are now being pushed back by the authorities in Telangana and AP. Ironically Chhattisgarh denies that any tribal family had moved out to other states or districts from the Maoist-affected Bastar zone.

During the last two years of the Covid pandemic, the vulnerability of these migrated tribal families has further escalated. “Despite being the adivasis, they are not being recognised as tribals in the adjoining states and remain deprived of the benefits they deserve owing to their caste. On a number of occasions, police and forest officials in Telangana, AP and other places have tried to push them back to Chhattisgarh. With no concrete action plan for them, where will they settle now?”, said Shubhranshu Chowdhary the convenor of ‘The New Peace Process’ campaign in the Bastar zone.

Local Congress MLA from Mulugu constituency Danasari Seethakka sharing her concern admitted the pathetic conditions in which the migrated tribals are living in her Telangana state and other adjoining states.

“I have visited their inhabited place. Our (Telangana) government too is not willing to accept them and asking them to go back and the Chhattisgarh government remains indecisive. The deprived tribal population are paying the price. When the refugees in our country can access the basic amenities and other safeguards, why are these tribals being ignored?”, she told this newspaper.

The peace activists appealing to the different state governments and the Centre have been seeking their rehabilitation in places that should be officially regularised. As they migrated during the controversial Salwa Judum (anti-Maoist campaign) launched in Bastar in 2005, they continue to strive to live with their lost identity and livelihood.

“Now it has been almost 15 years and most of them don’t have any valid document to prove their domicile to Chhattisgarh. It’s a genuine national problem where besides the Centre (home ministry), the judiciary should intervene”, affirmed Chowdhary. Last December, hundreds of displaced tribals have jointly written to the Chief Justice of India sharing their difficult situation.

The plight of IDP tribals gets further aggravated after the Chhattisgarh home minister Tamrdhwaj Sahu in the state Assembly in March 2021 stated that there is not a single case that has come to light about any family migrated to other states or districts from Maoist-affected districts of the Bastar zone.

“This doesn't seem to be true as around 500 families had written me letters informing me that owing to the Maoist problem they were forced to shift to adjoining states. Recently I had written to the principal secretary of Chhattisgarh assembly to review the reply given by the home department”, said Lakheshwar Baghel, Congress MLA and chairman of Bastar Area Tribal Development Authority.

The National Commission for Scheduled Tribes had on 12 January asked the chief secretaries of five states-Chhattisgarh, Telangana, AP, Maharashtra, Odisha to respond on the status on "action taken regarding the rehabilitation and resettlement of about 5000 internally displaced tribal families from Bastar region".

(THE NEW INDIAN EXPRESS)
117 Days ago