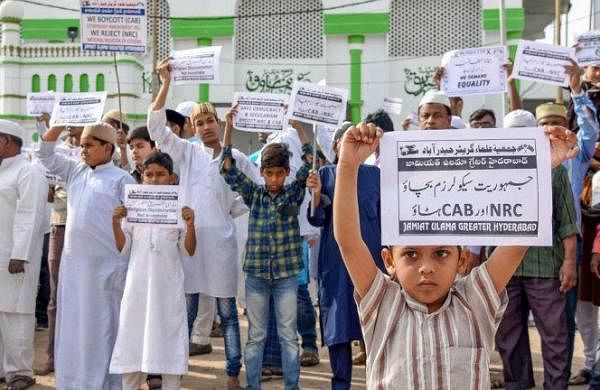 LUCKNOW: Two social sciences department students of Aligarh Muslim University (AMU) have been booked under the Indian Child Welfare Act for allegedly involving minors in the protests against Citizenship Amendment Act (CAA) to increase the number of protestors at Bab-e-Sayyad gate of the university on January 20.

As per the sources, the case was registered on the basis of a complaint lodged by District Child Welfare Officer Shrikant against Naeem Ali and Mohammad Asif along with their other unidentified friends at civil lines police station. As per the complaint, the minors were made to sit in the front row of the protesting crowd holding posters and placards in their hands. The complainant claimed that the children did not know anything about CAA against which they were made to protest.

On the basis of the aforementioned charges, both Naeem and Asif were booked under relevant sections of the Child Welfare Act. It is believed that the action against them had come after director, state child welfare committee, Dr Vishesh Kumar Gupta wrote a letter to state DGP.

Dr Gupta, in his letter, had purportedly claimed that minors in big number were being brought to AMU protests to increase the number and that it was illegal under India Child Welfare Act.

CO III Anil Samania confirmed having registered the case against Naeem and Asif.

However, in order to quell the protests, the state police are adopting various methods against protestors. In Muzaffarnagar, the district police have invoked the provisions of Juvenile Justice (Care and Protection of Children) Act, 2015 on protestors for allegedly using children for “illegal activity”.

The police action in this regard on over 34 protestors has come after a month as they were among 107 booked for unrest in the district last month. Notably, a number of protestors are being granted bail by the court as the police have failed to produce enough evidence against them to substantiate the sections of IPC slapped on them.

As per the sources, at least, over 34 persons have now been booked under the provisions of  Juvenile Justice (Care and Protection of Children) Act, 2015. All of them were named in FIR lodged on December 21 at Civil Lines police station for rioting, arson, vandalism. However, over two dozen such persons booked under JJ Act have got bail from the court.