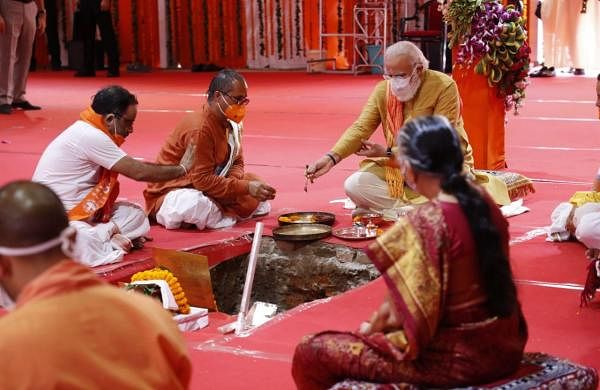 BHOPAL: An administrative and a police official have been removed from their posts over the alleged beating and detention of traders bursting crackers in Khargone district of Madhya Pradesh to celebrate the Ram Temple bhoomi pujan on Wednesday.

They were shunted out just a few hours after the ruling BJP, VHP, other saffron groups and trader outfits staged protests in Khargone town on Thursday over the beating and detention of jewellery traders celebrating the Ram Temple bhoomi pujan by PM Modi by bursting crackers.

Videos of a trader being beaten by cops over bursting crackers in Khargone's Saraffa Bazar area had gone viral on Thursday.

The BJP national general secretary Kailash Vijayvargiya had questioned Wednesday's police action against the jewellery traders in Khargone. Vijayvargiya had tweeted a video of a celebrating trader being slapped by cops.

The local BJP MP Gajendra Singh Patel, who was among those who participated in the protests on Thursday, had also questioned Wednesday's police action.

"No one can justify the thrashing of traders and later their detention for cops for sometime, when the state government had not imposed any restrictions on people to celebrate the Ram Temple bhoomi pujan at Ayodhya," the local BJP had said on Thursday.

According to sources in the Khargone police, the traders in Saraffa Bazar area were bursting crackers on Wednesday, out in the open in a communally sensitive area, which could have created law and order problems.

While the viral video showed one person indulging in cracker bursting being beaten by cops, the traders alleged many of those indulging in celebrations were later detained for around an hour by police.