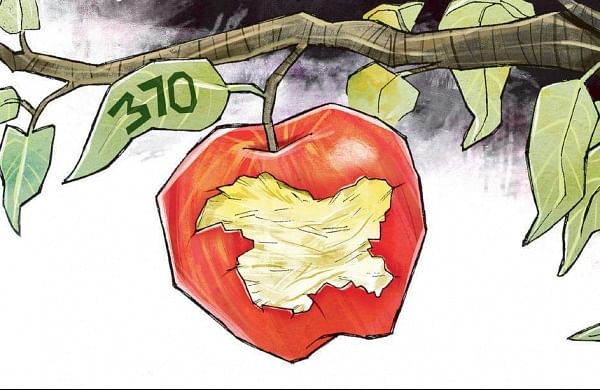 SRINAGAR: The PDP, Congress, People's Conference, and Apni Party on Wednesday questioned the BJP government on the achievements it made since revoking Article 370 in Jammu and Kashmir as they vowed to continue their struggle to get the erstwhile state's special status restored.

The National Conference, however, targeted Apni Party president Altaf Bukhari, who has announced to launch an agitation for the restoration of Jammu and Kashmir's special status, as a "frenzied attempt" to keep himself and his party relevant.

On August 4, the parties asked if the BJP government had managed to eradicate militancy, create jobs or rehabilitate Kashmiri Pandits in the valley.

President of the Peoples Democratic Party (PDP) Mehbooba Mufti termed August 5 as a "black day" in the constitutional and democratic history of the country, saying the "draconian steps" taken in 2019 have not only "betrayed" the trust of the people, but also complicated the issue of the erstwhile state further.

In a statement issued here, Mufti said August 5 has become a reminder of the "subversion of the democratic and the constitutional system of the country and how the trust of the people of Jammu and Kashmir and all the democrats of the country was betrayed".

Mufti said Jammu and Kashmir has to become a bridge of friendship rather than a bone of contention between India and Pakistan and the PDP will continue to strive to see this happen.

Reiterating that the party would continue to struggle and strive for the restoration of the rights and identity of the people of Jammu and Kashmir, Mufti said no amount of "coercion" would dissuade the party from advocating its core agenda of peace with dignity through dialogue and reconciliation.

She said two years after the Constitutional provisions were revoked, none of the stated goals of the government "that were used to camouflage the betrayal" of bringing Kashmir closer to India, ending militancy, bringing development to the state, have been achieved.

"There were around 70 active militants in 2014, while the number is over 200 today, despite the elimination of hundreds of terrorists since then," the Congress leader said.

Sharma also asked how many jobs were provided in the government sector in two years as the then governor S P Malik had made an announcement of providing 50,000 jobs in three months.

He said the demand for restoration of statehood with the protection of genuine rights to land and jobs remained high on the Congress's agenda along with that of holding early assembly elections to provide an elected government in Jammu and Kashmir.

The People's Conference said August 5 will perpetually be remembered as a "dark day" and "a day of disempowerment" in the history of the erstwhile state.

Party spokesperson Adnan Ashraf Mir said the decisions taken on August 5, 2019 are spiteful and contrary to the ideals and values of a democracy and the federal character of the Indian State.

The People's Conference (PC), he said, is committed to continue its principled struggle for the rights and dignity of the people of Jammu and Kashmir and that it will pursue this agenda through democratic and legal means.

Highlighting that the abrogation of Articles 370 and 35-A has incremented the trust deficit among the people, Bukhari said he strongly hopes and believes that the Supreme Court will restore the special status of Jammu and Kashmir.

Bukhari said if the apex court's verdict disregards the peoples' aspirations, the Apni Party will have no choice but to chalk out other peaceful means to pursue this goal with New Delhi.

"We believe that the solution to the socio-economic and political problems faced by the people in J-K lies with New Delhi, so it will be unwise to disengage or dissociate ourselves from pursuing the redressal," he said.

The Apni Party chief had on Tuesday vowed to launch a peaceful struggle for the restoration of Article 370 of the Constitution if the apex court did not restore it.

Taking a swipe at Bukhari, NC spokesperson Imran Nabi Dar said in a statement: "The remarks are a failed attempt to save his credibility on ground.

The radical changes in the views of Bukhari are well expected in view of people's immense support for the efforts of Farooq Abdullah for the restoration of J&K's constitutional status.

"His politics follows a simplistic maxim; it is to be on the good side of the BJP. But it has not fared well with the people. This recent statement of his should be seen as a last-ditch effort to save some credibility, if any at all," he said.

Bukhari, however, blamed traditional political parties for their policies of deceit and intrigue, saying it is not the BJP alone, but other political parties who have been pivotal in doing away with the special status of J&K.

"History bears witness to the facts that how J-K's political parties have played a collaborators' role in eroding Articles 370 and 35-A from time to time for their lust of power," he said.

"Now, they are shedding crocodile tears and sermonising on the subject. It's a shame for them. They should rather confess and apologise to the people for their criminal silence," he added.