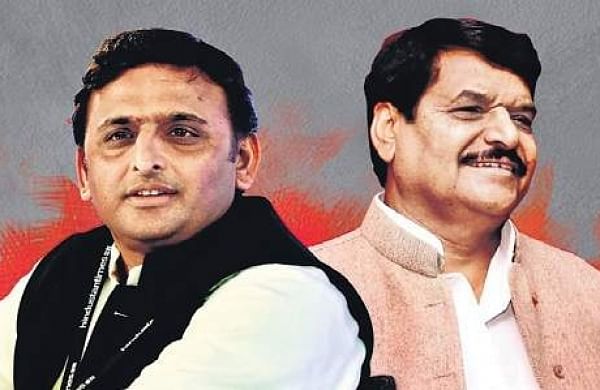 AGRA: Pragatisheel Samajwadi Party president Shivpal Yadav on Wednesday said that his first priority is to form alliance with Samajwadi Party in the upcoming UP assembly polls but he did not rule out the possibility of a tie-up with other "secular" parties.

The PSP national president also claimed that the Samajik Pariwartan Rath Yatra that began on Tuesday in Vrindavan, Mathura, would conclude at the birthplace of Lord Rama in Ayodhya after going through 75 districts in the state.

"For the forthcoming UP State Assembly Elections in 2022, we would give first priority to Samajwadi Party. We can also form an alliance with any party with a secular ideology with an aim to defeat the Bharatiya Janata Party government in UP," Yadav told reporters Wednesday.

Shivpal Yadav broke away from the SP in 2018 and formed his own political group - Pragatisheel Samajwadi Party - following a fallout with his nephew and former Uttar Pradesh chief minister Akhilesh Yadav.

Targeting the BJP government in UP and the Centre, the PSP president said that the saffron party has not fulfilled any promises.

"Promises such as controlling inflation, ending corruption and bringing back black money "besides, other unfulfilled promises such as doubling income of the farmers and taking back land from China etc," he said.

"We are carrying out Samajik Pariwartan Rath Yatra to connect with the people to know their main issues that were not fulfilled by the BJP government. And we will know those issues and when our government is formed in 2022, we will fulfil these promises," he added.