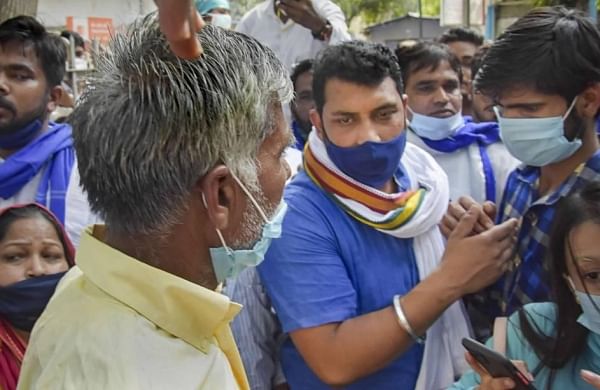 NOIDA: Bhim Army chief Chandrashekhar Azad and its Delhi unit head Himanshu Balmiki have been detained by the Uttar Pradesh police while on their way to Hathras accompanying the family of the 19-year-old Dalit gang-rape victim, his associates alleged on Wednesday.

There was no immediate confirmation from the police on this matter.

According to functionaries of the Azad Samaj Party, which was launched by the Bhim Army chief in March this year, Azad and Balmiki went missing after 10 pm on Tuesday while they were on their way to Hathras accompanying the family of the gang-rape victim who died in a Delhi hospital on Tuesday.

The Azad Samaj Party and the pro-Dalit outfit Bhim Army affiliates, among others, had joined protests outside the Safdarjung hospital in Delhi on Tuesday to demand justice for the gang-rape victim and her family.

"There is no clue about the location of Azad and Balmiki after they reached Jewar toll plaza to get on the lane to Tappal, Aligarh," Azad Samaj Party core committee member Ravindra Bhati said.

He alleged that Azad and Balmiki were detained during the intervening night on Tuesday and Wednesday but the police were not making it public.

The body of the gang-rape victim was cremated in Hathras in the early hours of Wednesday, with her family alleging the local police forced them to conduct the last rites in the dead of the night.

Local police officers, however, told PTI that the cremation was carried out "as per the wishes of the family".

(THE NEW INDIAN EXPRESS)
19 Days ago