UP TET paper leak: Over 30 persons arrested, 20 others under STF scanner 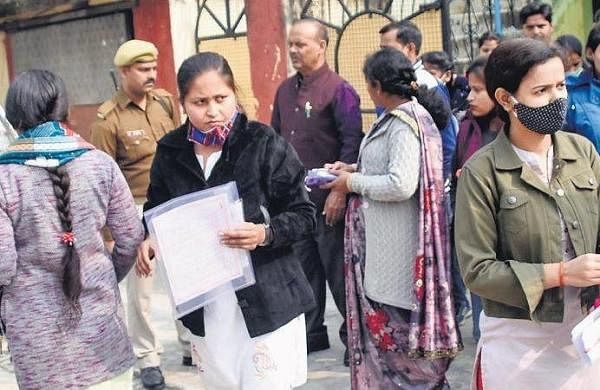 LUCKNOW: Over 30 persons have been arrested so far and another 20 are under the scanner of the UP Special Task Force (STF) in connection with the Uttar Pradesh Teacher Eligibility Test (UPTET) paper leak case here on Monday.

UP STF had busted the paper leak racket leading to the cancellation of the examination which was scheduled to be held on Sunday, November 28. Over 15 lakh candidates were set to appear in Teacher Eligibility Test that had to be held in two shifts.

According to sources, sleuths of STF suspect that those 20 persons, under its scanner, could be directly or indirectly involved in the racket of leaking the paper playing with the future of lakhs of aspirants.

Confirming the arrests, UP STF chief Amitabh Yash said that the STF was working on the case and had started arresting the persons involved in the racket a night before the day of examination. “Now STF is in overdrive to nab the kingpins of the racket as soon as possible and proceed with the strictest legal action against them,” said Yash.

“These rackets are operational across the states. Since a huge amount of money is involved in this racket of paper leaks and solver gangs, these exam mafias penetrate all the major recruitment examinations,” said Yash adding that STF was working on the database it had about such rackets and the kingpins. “All the examination conducting agencies are also under our scanner and probe is being conducted covering all the possible aspects of the racket,” said the officer.

Moreover, notices were also sent to the officials of the agency which had to conduct the examination and some clerks of the Uttar Pradesh Basic Education Board (UPBEB).

According to highly placed sources, Rajendra Kumar Patel, arrested from Prayagraj in connection to a paper leak, disclosed that he was in touch with owners of exam centers and supplied examinees with 'Bluetooth devices’ for cheating.

Likewise, another arrested accused claimed that he had arranged a solver at Rs 2.5 lakh for his two relatives to solve the paper on their behalf. Meanwhile, Uttar Pradesh Teacher Eligibility Test, UPTET 2021 Exam date is yet to be announced by the competent authorities. As per recent reports, the exam may be organized on or before December 26, 2021. However, an official confirmation and notice on revised dates are yet to be released by the department concerned.

The exam would be conducted by Uttar Pradesh Basic Education Board, UPBEB.