US stands with India in its efforts to defend its sovereignty, liberty: Mike Pompeo 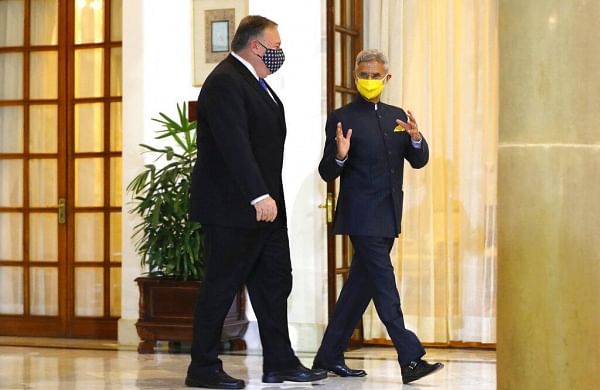 NEW DELHI: The United States stands with India in its efforts to defend its sovereignty and liberty, US Secretary of State Mike Pompeo said on Tuesday after the third edition of the 2+2 strategic dialogue that majorly focused on dealing with China's aggressive military behaviour in eastern Ladakh, Indo- Pacific and other parts of the world.

Severely critical of China, Pompeo, cited killing of Indian Army personnel in the Galwan Valley in eastern Ladakh in a clash with the Chinese military, and asserted that both India and the US are taking steps to strengthen cooperation against all threats and not just those posed by the Chinese Communist Party (CCP).

In the talks, the two countries inked a total of five agreements including the long-negotiated Basic Exchange and Cooperation Agreement (BECA) that will allow sharing of high-end military technology, classified satellite data and critical information between their militaries.

Government sources said a major focus of the talks was on China's "expansionist behaviour" across various parts of the world including its military offensive in eastern Ladakh, and the greater message was that both India and US are firmly together in dealing with all the security challenges in the region and beyond.

"We stand with India in its efforts to defend its sovereignty and its liberty," Pompeo said at a joint media briefing attended by his Indian counterpart S Jaishankar, Defence Minister Rajnath Singh and US Defence Secretary Mark T Esper.

Pompeo also mentioned about his visit to the National War Memorial and paying tributes to the 20 Indian soldiers who sacrificed their lives for the "world's largest democracy", and asserted that both India and the US are further strengthening their ties to deal with all challenges.

In his remarks, Defence Minister Singh said both sides shared assessment of the security situation across the Indo-Pacific, and reaffirmed commitment to peace, stability and prosperity of all countries in this region.

On his part, External Affairs Minister Jaishankar said the Indo-Pacific region was a "particular focus of our talks", adding a "multi-polar world must have a multi-polar Asia as its basis", comments seen as a clear articulation of India's position that China's dominance is not acceptable to it.

"We reiterated the importance of peace, stability and prosperity for all countries in this region. As Raksha Mantri stated, this is possible only by upholding the rules-based international order, ensuring the freedom of navigation in the international seas, promoting open connectivity and respecting the territorial integrity and sovereignty of all states," Jaishankar said.

US Defence Secretary Mark Esper said the US stands "shoulder-to-shoulder" in suport of a free and open Indo-Pacific for all, particularly in view of increasing aggression and destabilising activities by China, and noted that the bilateral defence cooperation is continuing to grow.

"We made clear that cross-border terrorism is completely unacceptable. In Afghanistan, India's stakes in its security and stability are evident, as is our willingness to contribute to international efforts to that end," he said.

The inking of the BECA completes finalisation of four key pacts between the two countries which were identified as crucial to significantly expand the strategic ties.

A key pact called General Security of Military Information Agreement (GSOMIA) was signed by the two countries in 2002.

The GSOMIA provides for specific measures to ensure security standards for safeguarding critical information shared by the US with India.

In a major move in 2016, the US had designated India a "Major Defence Partner" intending to elevate defence trade and technology sharing to a level commensurate with that of its closest allies and partners.

The two countries inked the Logistics Exchange Memorandum of Agreement (LEMOA) in 2016 that allows their militaries use each other's bases for repair and replenishment of supplies as well as provide for deeper cooperation.

India and the US signed another pact called COMCASA (Communications Compatibility and Security Agreement) in 2018 that provides for interoperability between the two militaries and provides for sale of high end technology from the US to India.

About BECA, officials said the agreement will give India access to classified geo-spatial data as well as critical information having significant military applications from the US.