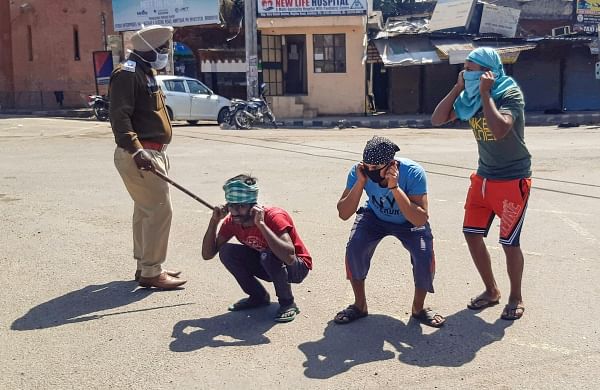 BADAUN: Migrant workers were forced by police to hop like frogs on the road for 'violating' lockdown orders, an act which a senior official admitted had dented the image of the force.

A video clip on social media shows three or four men with backpacks being made to hop as a policeman brandishes a lathi.

A few people on motorcycles and on foot are also seen in the clip, but the policeman appears to focus only on the youths, returning from Gwalior in Madhya Pradesh to their villages in Badaun district.

The men were on the way home after the nationwide lockdown to fight coronavirus left them jobless in Gwalior.

Senior Superintendent of Police Ashok Kumar Tripathi said the incident took place on Wednesday morning near Kheda Navada police post and blamed it on the 'foolishness' of a single policeman.

He said the policeman is inexperienced. He had joined the force a year back and is on probation.

The constable has now been shifted from the police post, an official said.

Tripathi said SP (City) Jitendra Kumar has been asked to probe the incident and action will be taken on the basis of the inquiry report, the SSP said.

Talking to a news channel, he regretted that one policeman's action had tarnished the image of the entire force, which he said is doing a lot of good work.

They are being food and water and vehicles arranged to take them to their villages.