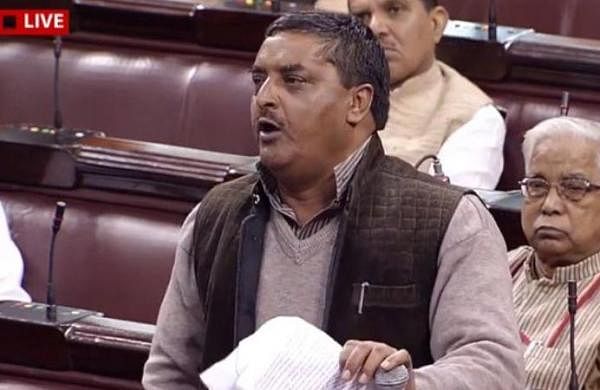 NEW DELHI: The Uttar Pradesh government is charging Rs 20 per quintal in cash in the name of unloading and cleaning charges for wheat procured from farmers and has not reimbursed them in the last three years, an MP in Rajya Sabha alleged.

Raising the issue through a Zero Hour mention, Javed Ali Khan of the Samajwadi Party said the government has fixed a minimum support price of Rs 1925 per quintal for wheat but farmers are being paid only Rs 1905.

Narrating his own experience of selling wheat at a government-mandated procurement centre, he claimed that he was asked to pay Rs 20 per quintal in cash as cleaning and unloading charges.

"When I demanded so see the order to this effect, the official at the procurement mandi showed me an Uttar Pradesh government order mandating Rs 20 per quintal as a charge for unloading and cleaning," he said.

The order stated that this charge would be reimbursed to farmers once cleared by the Centre and approved by the chief minister, he said, adding farmers have not received any reimbursement in the last three years.

"They don't take cheque or do an (RTGS) account transfer. They take cash and do not give a receipt," he alleged.

He said 36 lakh tonnes of wheat was procured in Uttar Pradesh this year and Rs 72 crore has been collected from farmers as this charge.

At the national level, Rs 780 crore may have been collected as part of these charges from farmers on 90 lakh tonnes of wheat procured, he said asking under what account can cash be taken and no receipt given.

Chairman M Venkaiah Naidu asked the government to take note of the issue.

Leader of the Opposition and senior Congress leader Ghulam Nabi Azad raised the issue of abolition of self-help groups for engineers in Jammu and Kashmir which has rendered 15,000 people unemployed.

He said economic activity has come to a standstill and unemployment has risen since the time Jammu and Kashmir was downgraded to a UT 13 months ago.

In 2003, the Congress-PDP government had constituted self-help groups for unemployed engineers so they could take up contracts.

Initially, such groups could take contracts up to Rs 5 lakh and as they gained experience they could take up to Rs 1 crore of contracts.

This helped give employment to 15,000 engineers, he said, adding four days back the UT administration has abolished these self-help groups, rendering them jobless.

P Bhattacharya of the Congress sought that traditional system of medicines such as homeopathy should be encouraged alongside allopathy in the treatment of coronavirus.

Vandana Chavan (NCP) raised the issue of students of vulnerable sections of society being unable to take benefit of online education as 27 per cent of students neither had smartphones nor TVs, nor laptops.

She demanded that the government upgrade digital infrastructure and make available basic digital devices to such students.

Digvijaya Singh of the Congress raised the issue of a spurt in the price of oxygen cylinders across states such as Madhya Pradesh, Gujarat, Odisha, and Uttar Pradesh.

The price of oxygen refill has risen from Rs 10 per cubic meter to Rs 50, he said, adding the government should strictly enforce the Rs 17 ceiling fixed for the same.

Bhagwat Karad of the BJP too joined the issue, saying there was black marketing of oxygen.

Swapan Dasgupta (Nominated) sought central forces for the security of Vishwa Bharti University as the local administration was "unresponsive" to the demand of the institution.

The university, he said, has been closed since August 17 after vandalism on the campus.

(THE NEW INDIAN EXPRESS)
448 Days ago