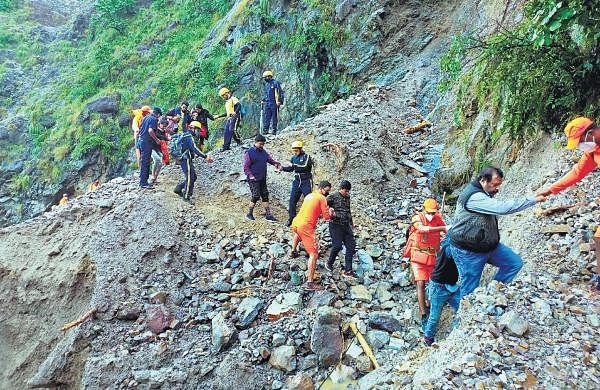 DEHRADUN:  With weather conditions improving in Uttarakhand, the magnitude of the calamity became clearer on Wednesday as the toll in rain-related incidents touched 55. The figure is likely to go up as a few are still missing and some of the 17 injured are reportedly in critical condition. Sources said some of the missing might be buried under the debris of houses that were levelled by landslides.

The torrential rains that battered the hilly state for the past few days have left roads blocked with boulders and villages without electricity.  Out of four the shrines of the Char Dham Yatra – Kedarnath, Badrinath, Yamunotri and Gangotri – the route to Badrinath remains closed due to landslide.

On Wednesday, Uttarakhand Chief Minister Pushkar Singh Dhami toured the rain-hit areas of the Kumaon region, instructing officials to prepare an estimate of the damage. Union Home Minister Amit Shah is expected to conduct an aerial survey on Thursday.

Gangtok cut off as torrential rains pound Sikkim
Kolkata: Heavy rains pounded the tiny Himalayan state of Sikkim and the tea growing region of North Bengal, causing landslides that cut off National Highway-10, the main road linking Gangtok with the rest of the country. Thousands of tourists, who thronged the hills during the Durga Puja season, got stranded because of torrential downpour in Darjeeling and Kalimpong districts