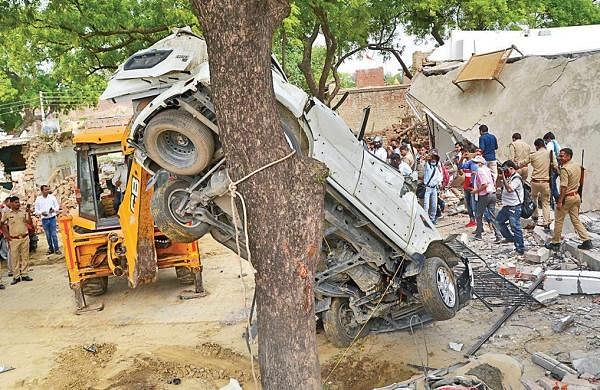 LUCKNOW: With the encounter death of Vikas Dubey, an era of terror has ended in Bikru village, said the residents. Many of them had suffered throughout their life at the hands of the dreaded gangster.

As his autopsy was going on, no one from his family came forward to claim his body. While his father, Ram Kumar, a paralytic and deranged old man, has refused to attend his cremation, his mother Sarla Dubey has disowned him saying she does not have any relation with Vikas.

“Appropriate treatment has been meted out to Vikas. If the administration does not crack down on such elements, lawlessness will continue to increase in the society,” said father Ram Kumar. Till the time Vikas was in the village, his father used to live with him. However, his entire family, including his wife Richa and son, live in Lucknow. Vikas had his empire in Bikru where he used to live alone with his henchmen.

Even his sister and her husband have also refused to accept the body and one of his nephews claimed that the don’s end had come like the killing of ‘Kans mama’- a mythological character in the era of Lord Krishna.

As the news of Dubey's killing flashed across TV channels, his neighbours and others in Bikru village heaved a sigh of relief and celebrated the end of terror. “It feels as a nightmare has ended. We were in the habit of living in fear,” says Ramphal, 55, a small farmer of Bikru.

His neighbours now speak out against him. “It still seems that he is watching us and will harass us later for speaking against him,” says Aantu Pandey, one of his neighbours.

“Majority of the villagers had had a taste of his terror at some point in their life,” says Sabina. “We are also among the sufferers. He used to thrash my father and uncle mercilessly every now and then over petty issues. We had written to the then CM in 2013, but no action was taken against him,” she says with a glint in eyes, adding that his killing has come as a celebration bigger than Eid for her family. “Now we will be able to breathe in free air,” said Sabina, 37.

Dubey’s clout always ruled the roost in Bikru. “Anyone, who used to forget to greet the don or his henchmen while passing through the locality where his house is situated, would get from them later. No one can believe how ruthless the gangster was.

He used to get people badly thrashed if he was defied,” says Ujjwal Singh, 34. He adds that the gangster used to live alone in his palatial residence with all the upmarket vehicles at his gate.

The villager said  Dubey would throw parties at his house ensuring participation of prominent politicians with cops lined up for his security and service. “Night-long parties used to be organised by Vikas. Loud music and dance used to be the order in the parties with many VIPs as invitees,” says a resident on the condition of anonymity.

“All the politicians supported him. Even a former MLA used to tie rakhi to Dubey by claiming that the gangster was her brother,” he added.

“Whenever the gangster and his men passed through our lane, we were not allowed to raise our head. Rather greeting him with namaste was a rule. If someone failed to do so, he was brutally beaten up. We were forced to live in terror. Today, God has answered our prayers,” said the neighbour, showing copies of the applications that they had given to police and ministers against the history-sheeter.