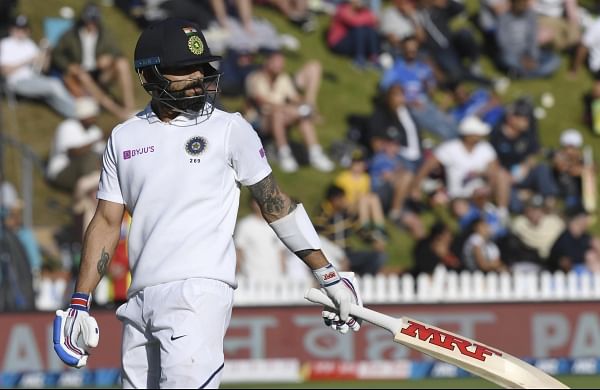 DUBAI: India skipper Virat Kohli lost the top spot in the ICC Test Player Rankings after managing only 21 runs in the first Test which his side lost to New Zealand by 10 wickets in Wellington.

Kohli, who has 906 points, slipped to the second position in the list which also features Ajinkya Rahane, Cheteshwar Pujara, and Mayank Agarwal at the eighth, ninth and 10th place respectively.

While India vice-captain Rahane, who scored 75 in the opening Test, gained a spot and Mayank returned to a career-best 10th position after amassing 92 runs, which included a second-innings half-century, Pujara dropped two places after returning with identical scores of 11 in the two innings.

Kohli's slump meant Australia's Steve Smith was back on top of the list for the eighth time after first occupying the top position in June 2015.

The last batsman apart from Smith and Kohli to be number one is New Zealand's Kane Williamson, for an eight-day period in December 2015.

In bowling chart, off-spinner Ravichandran Ashwin, who took three wickets for 99 in the first innings against New Zealand, slipped a place to ninth but remained the only Indian featuring in the top 10 with 765 points.

Fast bowler Ishant Sharma, who took a five-wicket haul on his comeback from injury during the opening Test, gained a place to be at the 17th spot.

New Zealand pacers Tim Southee and Trent Boult made big gains after finishing with nine and five wickets, respectively in the first Test against India.

While Southee advanced eight spots to take the sixth position, which is his highest since a career-best fifth place in June 2014, Boult moved up four slots to take a joint-13th position.

The all-rounders' list features Ravindra Jadeja and Ashwin at the third and fifth positions respectively.

While Jadeja didn't play the first Test, Ashwin scored 0 and 4 in the two innings to lose a place.

In the ICC World Test Championship, India continues to be placed at the top with 360 points, followed by Australia (296).

New Zealand is on 120 points after gaining 60 points for the Wellington victory. They had won 60 points in a 1-1 draw against Sri Lanka.