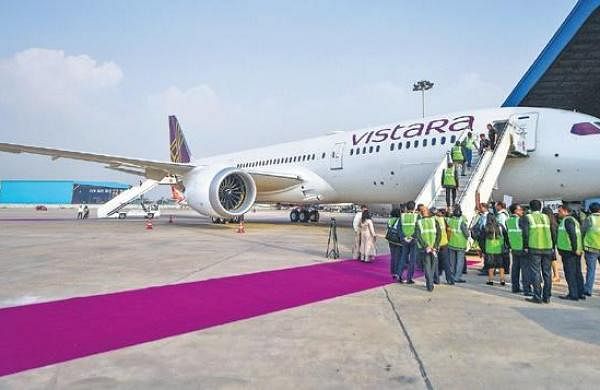 KOLKATA: Vistara said its first 787-9 Dreamliner aircraft, which was delivered to it by Boeing in February this year, operated its maiden commercial flight from Delhi to Kolkata on Thursday morning.

While domestic passenger flights resumed across India from Monday, they restarted in Andhra Pradesh from Tuesday and in West Bengal from Thursday.

In a press release, Vistara's Chief Commercial Officer Vinod Kannan said, "We are seeing a reasonable demand on some of the routes and are happy to add more flights to fly people home and help them reunite with their loved ones.

This also enabled us to deploy India's first Boeing 787-9 Dreamliner on the Delhi-Kolkata route on 28 and 29 May 2020." The airports at Kolkata and Bagdogra have been permitted to handle 20 daily flights each from Thursday onwards.

The airline said its flight UK705, operated using Dreamliner plane, departed from Delhi at 7.05 am on Thursday, and arrived at Kolkata at 8.55 am. There are 30 seats, 21 seats, and 248 seats in business class, premium economy class and economy class of this wide-body aircraft.