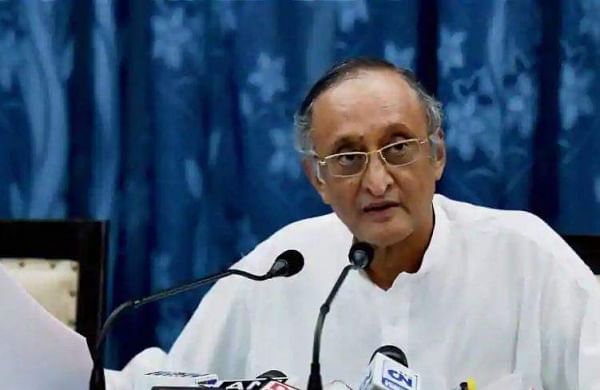 NEW DELHI: West Bengal Finance Minister Amit Mitra on Saturday alleged that his voice was "muzzled" during the GST Council meeting on Saturday and his opposition to levy taxes on Covid essentials like vaccines, masks, PPE kits and anti-viral drug Remdesivir, was not heard.

The 44th GST Council meeting, chaired by Union Finance Minister Nirmala Sitharaman and comprising state ministers, on Saturday slashed tax rate on Covid drugs such as Remdesivir and Tocilizumab as well as on medical oxygen, and oxygen concentrators but ignored demands for a reduction in taxes on vaccines.

In the evening, Mitra tweeted: "GoI-led the anti-people move & imposed GST on vaccine, mask, hand sanitizer, oxygen, PPE, oximeter, Covid test kit, Remdesivir, RT PCR machine.. Since my voice ignored, I have recorded my dissent by letter. Unprecedented. Slow death of the only body of cooperative federalism". Mitra had suggested zero rating or 0. 1 per cent GST on Covid essentials."

In the letter to Sitharaman, Mitra said the decision to continue to levy GST on Covid-related items is "anti-people" and "draconian" which will hurt millions of people.

"I tried my best to repeatedly raise my objection after your announcing this decision, but unfortunately, I was never given the floor and my voice was muzzled, as the Secretary brought the meeting to a close and the virtual link was cut off. Whither GST Council!" Mitra wrote.

Taking to twitter, Thakur said he would like to "set the record straight", and went on to add that in his over two years of attending the GST Council, Sitharaman has never cut off anyone during the Council discussions.

"During the GST Council discussions today (June 12), it seemed as if the Finance Minister from West Bengal did not have a stable VC connection.

Revenue Secy repeatedly informed him his line was breaking, that he was not properly audible & to turn off his video for better connectivity," Thakur tweeted.

He said that during the speech made by the Uttar Pradesh Finance Minister, nobody heard Mitra speak, nor did he ask to have his opinion heard.

"Other members can attest to this".

"At the end of the discussion, when FM @nsitharaman ji asked the Council whether anyone would like to speak & add their comments, Dr Mitra ji again remained silent and did not speak up," Thakur added.

Stating that Sitharaman has patiently given every speaker as much time as they needed, Thakur said "the Finance Minister has never stifled dissent in the GST Council.

It is unbecoming of a senior member of the Council to suggest that this has happened.

The GST Council embodies the collective spirit of all states towards debate in a healthy manner; it has been & shall continue".

Mitra said that instances in Saturday's GST Council meeting have dealt a major blow to the spirit of cooperative federalism undermining the very ethos of the GST Council.

"In your remarks near the end of today's GST Council meeting, you referred to several of my observations by name and yet I was not given the floor despite repeated requests to respond to your comments. Instead you gave the floor to the Minister from UP, who sought deletion of some of my comments by name and shockingly you agreed."

"I could never imagine that this would come to pass in a GST Council meeting where my voice is muzzled, despite the restraint and decorum that I have maintained in the 44 meetings of the GST Council-- truly unprecedented.

Obviously, this and other instances in today's GST Council meeting have dealt a major blow to the spirit of cooperative federalism undermining the very ethos of the GST Council," Mitra added.

The Council cut to nil GST on COVID-19 drug Tocilizumab and black fungus medicine Amphotericin B, from existing 5 per cent.

Hand sanitiser, pulse oximeters, BiPAP machine, testing kits, ambulances and temperature check equipment were among the 18 items on which GST rates were lowered.