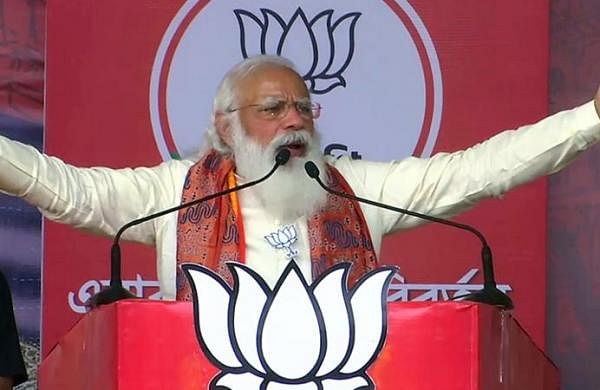 BARDHAMAN (West Bengal): Drawing a cricket analogy, Prime Minister Narendra Modi said on Monday the people of Bengal have hit so many fours and sixes in the first four phases of the assembly polls that the BJP has already completed its century and the TMC is on course to being wiped out.

He came down hard on Chief Minister Mamata Banerjee, accusing her of instigating people against central forces on election duty in the state.

The prime minister also launched a blistering attack on Banerjee, saying she did not care to express regret after a "leader very close to her" called Scheduled Castes "beggars".

"People of Bengal hit so many fours and sixes that BJP has already completed a century (of seats) in the first 4 phases of assembly polls. They have wiped out the TMC in half the match (aadha mein poora saaf).

"People of Bengal have clean bowled Didi in Nandigram and have asked her entire team to leave the field," he told an election rally in Bardhaman.

Alleging that Banerjee incited people against central forces, he referred to the killing of four people in the firing by CISF personnel in Cooch Behar on April 10.

"Your (Banerjee's) policies have snuffed out the lives of children of countless mothers," he said.

Modi castigated Banerjee over a TMC leader and candidate's comments against the Scheduled Castes equating them with beggars.

You tell me is it possible for someone to say such things without her permission? Such comments hurt the soul of Babasaheb Bhimrao Ambedkar.

You have committed the biggest mistake, the biggest sin by insulting Dalits, Didi," Modi said. Accusing Benerjee of dividing people, Modi said "Jukto koro-Seva Koro" (uniting people and serving them) is his motto.