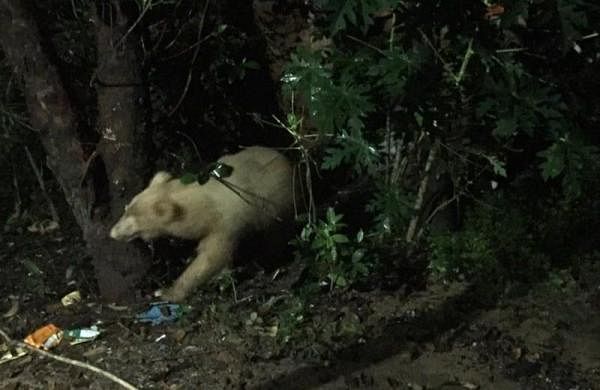 RAIPUR: A rare white bear was spotted close to the forest range of Koriya district, about 380 km north of Raipur, a senior forest department official said.

The photo of the bear captured by a local resident on his mobile phone camera at Domanhil in Chirmiri was shared with the local forest officials.

"I have been noticing the white bear visiting in my farmhouse to consume jack fruits during the past couple of weeks," said Ilyas Ahmed Siddiqui, who snapped the photos.

"In Chrimiri range of Koriya forest division, the sloth bears are in good numbers but this is for the first time such a rare white bear has been found in this region. The groundstaff have been instructed to keep a close eye. Awareness has also been created among the locals to remain on the alert. We need to ascertain whether the white bear in not an albino (due to gene mutation)," said SD Singh, Chirmiri forest ranger.

Earlier in May this year, a stunning black panther was captured on camera while roaming around in the jungles of Achanakmar forest reserve in Bilaspur district.