Will never buckle under pressure, join BJP: Chidambaram lashes out at Modi government 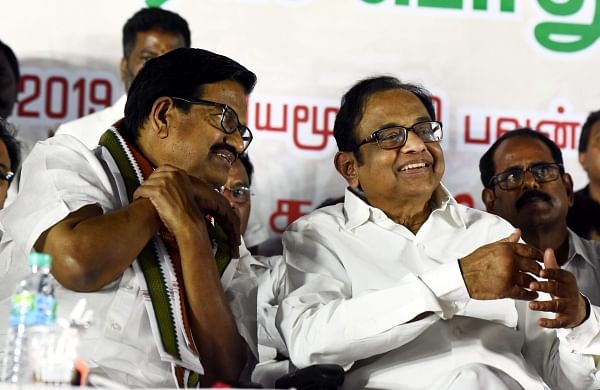 CHENNAI: Senior Congress leader P Chidambaram on Saturday alleged that the ruling BJP's goal was to strangulate freedom by targeting rivals by filing cases against them and asserted that he will never buckle under pressure and join the ruling BJP.

He alleged that BJP's objective was to "strangulate the voice of freedom" and the ruling party had been working towards it by targeting rivals by filing cases against them.

The senior leader, who arrived here today from Delhi, was addressing a public meeting at the Tamil Nadu Congress headquarters 'Satyamurthi Bhavan' "Newspapers should not write, television channels should not debate," he said adding the ruling party's goal was also to not allow "political leaders" (rivals) to criticise it.

To ensure implementation of its agenda, the ruling party at the Centre was bent on "strangulating" their voices, he alleged.

Similarly, TDP's C M Ramesh and Y S Chowdary, who were the "left and right hands" of party chief Chandrababu Naidu had earlier this year joined the saffron party.

"Both of them have cases against them and both are today in the BJP," he said. Sarcastically, Chidambaram likened the BJP to river Ganga, a dip in which is believed to cleanse devotees of their sins.

"The BJP is River Ganga and all sins will vanish after taking a bath in it. I will never take a bath in that Ganga (the BJP). I will bow before justice and judge, I will never bend before injustice," he said, apparently indicating that he will not buckle under pressure and join the BJP.